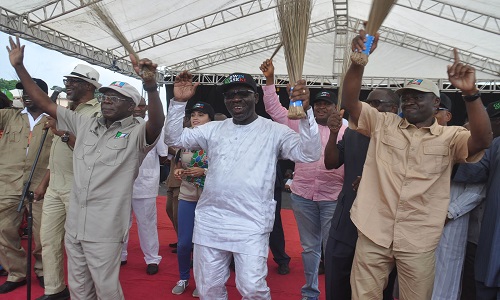 Governor of Edo State, Comrade Adams Oshiomhole, has kicked against postponement of the governorship election in the state by the Independent National Electoral Commission, INEC, for two weeks or more.

Instead, he advised the electoral body to postpone the polls for one week because of the planned coronation of the Oba of Benin, which was fixed for September 26.

The shift came 24 hours after the warning by the Department of State Services (DSS) and the Police that terrorists might target Edo and other states during Sallah.

In his reaction, the governor, who spoke on a television programme last night in Benin, said the coronation is a big event which every Edo man celebrates and has a role to play, therefore, the election should be held earlier.

“We have a big event in Edo on September 26 which is the Oba’s coronation. Before that day, there are other events that must be done. It will not be proper to hold election during that period, why not postpone the election for one week?” Oshiomhole asked rhetorically

He denied claims that the ruling All Progressives Congress (APC) was afraid of defeat, saying that the party defeated the Peoples Democratic Party (PDP) in 16 local government areas in the last election held in the state.

Gov. Oshiomhole, while stressing that his party was ready for the election and that Edo is not a war zone, said, “We will win the election. The PDP has no credibility in this state”.