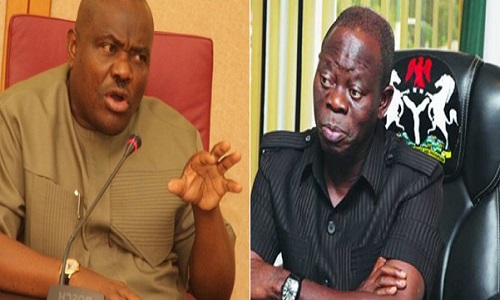 In what may just be the beginning of a war of words between governors of two South-south states, Adams Oshiomhole of Edo State dealt his Rivers State counterpart, Nyesom Wike, a savage blow, advising him to face governance in his state by paying suffering workers their salaries, instead of squandering the peoples’ scarce resources on an election the Peoples Democratic Party (PDP) is bound to lose.

Governor Oshiomhole’s attack on Wike was in apparent response to the Rivers governor’s statement last week that the Edo governor does not know when to stop lying.

The duo are engaged in a brickbat over support of their parties in the forthcoming September 28 governorship election in Edo.

Oshiomhole said it was laughable for Governor Wike to have some level of effrontery to talk about governance when he (Wike) has been unable to pay the state’s workers’ salaries for several months.

He urged Governor Wike to learn how to talk to him, “that is performing and up-to-date with payment of salaries and not one, whose noise alone can cause further pollution in a Rivers environment that was already degraded”.

Mr. Oshiomhole also advised Wike to spend the money he planned to spend for the PDP in Edo State to pay the backlog of salaries owed civil servants in River State.

The Edo governor had over a week ago alleged that Wike and Governor Ifeanyi Okowa of Delta State, contributed the sum of N2billion to the campaign of the PDP candidate in the state, Pastor Osagie Ize-Iyamu – a claim the governors denied.

Speaking through the State Commissioner for Information and Orientation, Prince Kassim Afegbua, Oshiomhole stated that there was no reason why Wike would waste the people’s resources on Edo election out of sheer desperation to acquire regional powers.

According to him, “In the circle of governance, where men are truly called men, someone like Governor Wike cannot muster any courage to be called a man when he has continuously held Rivers workers in scorn without paying them their due salaries and emoluments.

“Even though Edo State is not as economically viable as Rivers State, we do not only pay our workers salaries, we have since increased our workers minimum wages from N18,000 to N25,000.

“That this salary increase is happening at a time when Governor Wike is lamenting over paucity of funds should explain in greater details our uncommon creativity and prudent management of resources.

“The last time we visited Rivers State, we were appalled by the plights of Rivers workers whose lamentations Governor Wike has consistently ignored. Our piece of advice to him as a younger brother was to properly guide him so he doesn’t go astray by the temptations of an election that his party is bound to lose.

“Rather than waste Rivers people’s money, keep Rivers people’s money for them. He should be reminded that Edo voters are not gullible like voters elsewhere and their level of sophistication would make the September 28th election a smooth sail for the All Progressives Congress. It is our responsibility to caution Governor Wike before he exports his gangsterism to Edo State”.