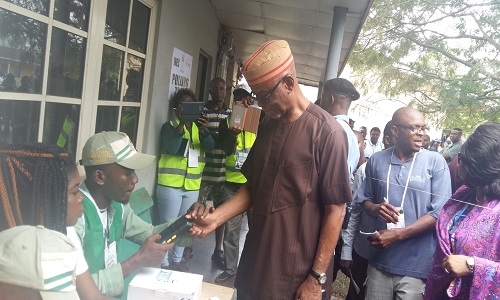 Oyegun, who voted at Ward 2, Unit 2 in Oredo local government area at 11: 45 a.m., said: “I am impressed with the conduct of the election so far.

“The atmosphere has been peaceful and the weather has been very friendly to us all. The voters have been wonderful in their conduct”.

Oyegun also commended the large turnout of voters, saying: “the turnout is wonderful and I am pleasantly surprised”

“I hope, and it’s presumed that something good is about to happen in the state.

“It is a sign that the people are beginning to express their democratic rights and that democracy has become totally widespread in the state.

“It’s peaceful so far because I have been watching events on TV”.

The News Agency of Nigeria (NAN) reports that Oyegun described the security arrangement as “lovely and wonderful.”

“As the National Chairman of my party, it was something that was of grave concern to us all.

“All the security agencies have given us iron clad assurance that there will not be a major incident”, he said.

On the allegation of money inducement in some centres, he responded: “I have not seen any where I have just voted”.