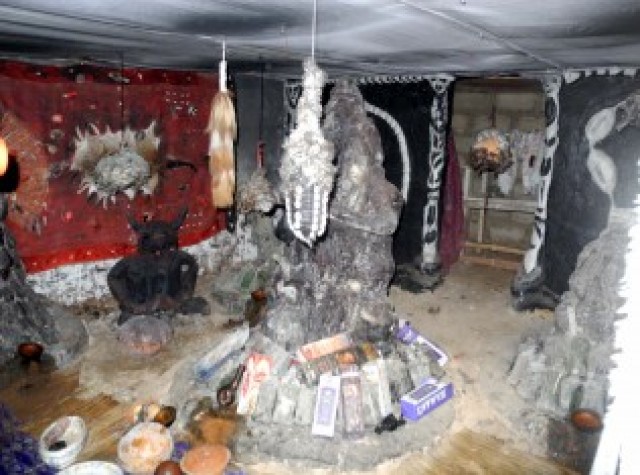 A  pastor, Wale Fagbere, who invaded a community shrine at Ketu – Ayetoro in Yewa North Local Government Area of Ogun  State on Saturday, in an attempt to destroy it has been rendered unconscious and speechless.

Fagbare who had boasted of clearing the place of worship for the community traditionalists was believed to have been trapped and rendered motionless by forces suspected to be spirits.

It was gathered that those who sighted him in his agony, unable to lift his feet, raised the alarm, which drew attention of priests in charge of the shrine.

The priests, it was learnt demanded for some rituals to be carried out before he could be set free.

According to reports, he was released and treated following intervention of the Alaye of Ayetoro, Oba Abdulaziz Adelakun.

Confirming the incident, the Ogun State Police Spokesperson, Abimbola Oyeyemi, said the cleric may be charged with “sacrilege and malicious damage.”

He said, “the Command got the report at its Division in Ayetoro that one Evangelist Wale Fagbere went to Ketu to destroy traditional worshippers’ shrines.

“After the destruction, the man became unconscious, motionless and could not talk.

“When the policemen visited the place, the traditionalists claimed that the subject cannot be taken away until some spiritual exercise was performed.”

“The Alaye of Ayetoro, Oba AbdulAzeez Adelakun, waded into the matter which led to the release of the man,” he added

“The victim has been revived and handed over to his family. The police’s next step would be determined by the traditionalists.

“If they complain to the Police about the destruction of their shrine, the victim would be charged for sacrilege and malicious damage.

“Everybody has right to worship anything he so desires,” the Police PRO stated.