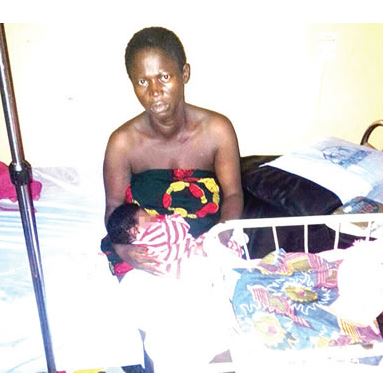 A pastor with a Pentecostal ministry, Chinedu Rockson, has accused the management of Ilogbo Central Hospital in the Ajangbadi area of Lagos State of removing his wife’s womb and damaging her bladder during childbirth.

Chinedu said the hospital also detained his wife over the payment of N50,000, adding that efforts to clear the bill had been frustrated by the hospital.

PUNCH Metro learnt that Chinedu’s wife, Chinansa, had been referred to the hospital on August 26, 2016, after she could not be delivered of the baby at the hospital where she had her antenatal care.

The hospital reportedly commenced a caesarean section on the 42-year-old after her husband signed some documents to perfect the terms.

Chinedu explained that some hours into the operation, he was called into the theatre to sign another document, adding that nobody told him it was for the removal of his wife’s womb.

“They asked me to sign some papers, which I did. Some hours later, a surgeon said there had been complications and I would need to sign another document. He didn’t tell me what I was signing for or the implications. Because I was in a haste to get my wife saved, I signed the document.

“After some time, they brought out my wife from the theatre with a pipe attached to her bladder. We became worried when we discovered that few days afterwards, they didn’t remove the pipe.

“After a week, they said I should come and clear my bill of N50,000 so they could discharge her. I called a senior pastor, who presented them with a cheque. But they said they would keep her for the two weeks that the cheque would be ready to be cashed.”

PUNCH Metro gathered that a sister-in-law, who visited the victim at the hospital, asked the management why the pipe had yet to be removed.

The hospital was said to have opened up that Chinansa’s womb had been removed and her bladder damaged.

“They said she cannot control her urine without the pipe. That was when I realised what had happened,” Chinedu said.

The pastor lamented that his wife’s medical condition had worsened, adding that he could neither afford the hospital bill nor take her back home in her present condition.

It was learnt that the couple, who are indigenes of Anambra State, married in 2002 and had four children, including the newborn baby.

Lawyer to the Rockson family, Chris Ogbedeneto, in a petition to the state Commissioner of Police, Fatai Owoseni, called for an investigation into the case.

He said, “Why should there be a second signing? They scared the husband with the sight of his wife in a pool of blood and did not let him know what he was signing for. What is the relationship between the womb and the bladder and why does the hospital’s director now want to discharge the woman when it is obvious that her life is in danger?

“The doctor’s action can breach the peace of the community if urgent actions are not taken. Our client feels debased and suffers a mental and psychological trauma on realising that the wife’s womb has been cut off and the bladder affected without his consent and his wife cannot control her urine anymore.”

The hospital, in its reaction, denied any wrong doing in the matter, saying Chinansa was in a bad shape when she was admitted.

A director at the hospital, Dr Femi Obileyi, said the mother of four could have died but for the quick intervention of the hospital.

He said, “We are known for standard in the area where we operate and that is why we enjoy a lot of patronage. The woman in question had been mismanaged ab initio. She burst her womb in the first hospital where she registered. They pressed her womb to force the baby out and that action ruptured the womb. When she was brought to us, she was bleeding because the labour had become obstructed.

“We discovered that to save her life, we would need to do a surgery. At surgery, we discovered that her uterus had burst, which had also affected her bladder. We first stopped the bleeding and then made some repairs. It was after all these that we discovered she could not control her urine.

“When they came to us, they had issues with money, which we didn’t allow to be a barrier. We admitted her and did everything possible to save her life. We can’t imagine that after saving her life, the family will turn around to fight us.

“The man was called in when the attempts to repair the womb proved abortive. He was informed that the tear was serious and we had to save her life. We did that to carry him along, and he gave his consent.”

The Police Public Relations Officer, SP Dolapo Badmos, said she would get back to our correspondent on the case, but she had yet to do so as of press time.