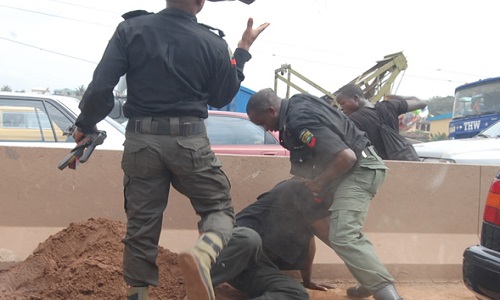 Ahead of the September 10 governorship election in Edo State, the Peoples Democratic Party, PDP, has called on its members to resist arrests by the police unless there’s a warrant to such effect.

The party said it was issuing the statement because it uncovered an alleged plot by the governor of the state, Comrade Adams Oshiomhole, to use police officers attached to him for harassment and intimidation of its members.

“In view of the unconstitutionality of this wicked act, the PDP has instructed our members to resist henceforth all police arrests not backed by any relevant warrant of arrest”, the party said in a statement by its spokesman in Edo State, Chris Nehikhare.

“We want to again call on all lovers of peace and democracy to prevail on the governor and his party, the APC to tow the path of sportsmanship and decency in the contest for the office of the governor of Edo State which comes up in a few days”, Nehikhare said.

The party, therefore, urged the police hierarchy to take steps to forestall outbreak of violence in the state, warning that failure to do so, its members would not be liable for “breakdown of peace that may result from this attempt to deny law abiding citizens the freedom to make their choice and exercise their franchise”,

“We call on the Nigerian Inspector-general of Police, the Assistant Inspector-general of Police in charge of Zone 5 to immediately intervene and find urgent ways to reverse this unholy and unwarranted harassments of PDP leaders.
‎
“This call is necessary because there is a limit to the patience of PDP members and we cannot guarantee their reaction if these unprovoked arrests by Governor Oshiomhole’s men continue unchecked”, the PDP said.