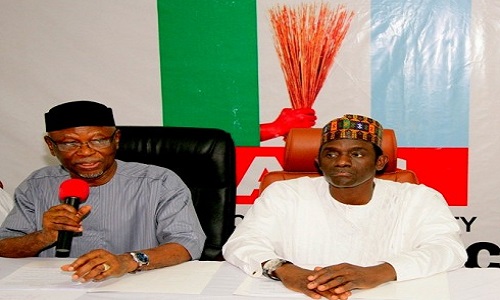 The All Progressives Congress (APC) has maintained its stand that the prevailing economic hardship is a direct consequence of mismanagement of the nation’s economy and looting by the past administration.

The governing party yesterday, described as fraudulent, insensitive and an insult to Nigerians, the opposition Peoples Democratic Party, PDP’s attempt to turn the truth on its head by blaming President Muhammadu Buhari for the economic recession in the country.

The National Caretaker Committee of the PDP had weekend attributed the current economic recession in the country to the incompetence and lack of vision by the APC-led federal government.

It also blamed the governing party’s economic policies for the “current stagnation of the economy”.

In its reaction, the APC, in a statement issued in Abuja by its National Secretary, Mai Mala Buni, urged the PDP to own up to what it described as the opposition party’s transgression, and apologise to Nigerians for mismanaging the nation’s wealth while it was in power.

The National Bureau of Statistics last Wednesday confirmed that Nigeria’s economy was officially in recession after its Gross Domestic Product contracted by 2.06 per cent in the second quarter of 2016, the second time of recording negative growth rate consecutively.

The PDP had in its immediate response to the NBS report, called on the president to resign, if he is unable to reverse the disastrous economic decline he has brought on Nigerians.

But the APC urged Mr. Buhari not to be distracted by the PDP but to remain focused in his effort to restore economic growth.

The statement reads: “In reacting to the orchestrated and insensitive comments by the PDP on the economy, the APC urges the President Buhari-led administration to remain focused in its bid to restore economic growth.

“In spite of the PDP’s orchestrated and feeble attempts to blackmail the administration and twist facts, the reality remains that the socio-economic hardship faced by Nigerians is a direct consequence of mismanagement of the economy and unprecedented looting perpetrated under its watch.

“The PDP’s attempt to turn truth on its head is fraudulent, insensitive and an insult to Nigerians. For the umpteenth time, the PDP must own up to its transgressions, and apologise to Nigerians.

“Going forward, the task before the President Buhari-led APC administration is to restore the country’s battered economy back to health and all legitimate and innovative means are being employed to achieve this.

“The APC assures Nigerians of the political will and commitment of the President Buhari administration to revive the economy and tackle the nation’s challenges through suitable and well-thought out economic policies, fiscal discipline and socio-political reforms.

“Among other strategic economic agenda, diversification of the country’s economy is a priority for the administration. To this end, President Buhari is aggressively formulating and implementing policies aimed at diversifying the economy from oil to other sectors, such as agriculture, mining and manufacturing.

“The APC assures Nigerians that the administration will pull the country out of the hardship. With the support, cooperation, patience and prayers of Nigerians, the country will reach its potential under our leadership”.