PDP Is Responsible For Criticism Of Aregbesola’s Achievements – Osun Govt 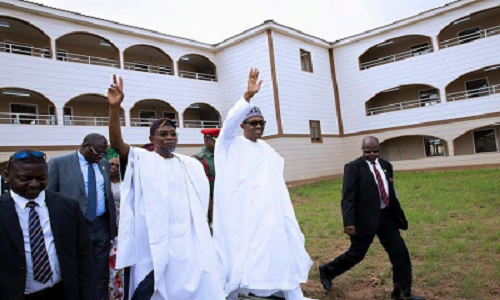 The Osun State Government has asked Nigerians to ignore attempts by the Peoples Democratic Party (PDP) in the state to water down the laudable achievements of the Rauf Aregbesola administration.

The opposition party in the state had accused the Aregbesola administration of misleading President Muhammadu Buhari when he visited the state last week to formally commission the Osogbo High School, as part of activities to mark the 25th anniversary of the creation of Osun State.

The Osun PDP chairman, Hon. Soji Adagunodo had in a statement issued last Friday, said the edifice commissioned by the president is not a public school but a fee charging one to be managed commercially until the loan taken to build it is repaid.

“We want to alert the public and President Muhammadu Buhari that they were deceived as the new school is not a public school as publicly presented at the commissioning. Contrary to reports presented to the president and the public, the school is more or less a business outfit to charge high fees in an impoverished Osun State”, Mr. Adagunodo said in the statement.

In its reaction, the government, through its Bureau of Communication and Strategy in the Office of the Governor, said the allegation from the PDP was no more than a case of sour grape arising from its shattered expectation that President Buhari would not honor the state with his presence to commission the school.

“PDP lacks the capacity to comprehend the administration’s strategies to make education quality in Osun catch up and surpass what any elite school in Nigeria offers”.

It said the Aregbesola administration has a comprehensive strategy towards changing the face of education and bringing it to the same level of what any elite schools in Nigeria can offer.

The Bureau’s statement, signed by its Director, Mr. Semiu Okanlawon, asked Nigerians to demand from the PDP which insights it has into the workings of the Osun Government’s various strategies to turn around the fortune of education in the state.

The Bureau noted that the opposition party’s claim could only be its own imagination arising from its anti-people orientation that whatever is good, modern, spectacular and qualitative is an exclusive preserve of its own class of elite.

The Bureau’s statement said, “We are not like them. This is a case of sour grape on the part of the PPD that wants to disparage the great achievements of the governor.

“Aregbesola’s mission in education is to democratize it and bring it to the poor who could possibly never have been opportune to be educated along children of the affluent in Nigeria”.

The Bureau said so far, no fewer than 50 of the Osun Government’s school projects are already open for use, demanding which one has been changed to ‘high fee’ paying school.

“As at today, Osun has completed no fewer than 50 of such mega schools across the state that has already been put to use by Osun pupils without the PDP’s imaginary ‘high fees’.

It said that the Aregbesola administration’s refusal to be slowed down in its development agenda has remained a source of a headache to the opposition, adding that none of the claims of the party against the governor has been found to be reliable or true since the PDP embarked on its mission to destroy Osun.

“But we cannot be bogged down by the emptiness of PDP’s ideas and the hollowness of the party’s arguments. They said it openly that Buhari would not honor Osun people with his visit.  Mr. President came and he was enthusiastically welcome by all the people of Osun. He was pleasantly surprised by the landmark and enviable achievements of Ogbeni Rauf Aregbesola in the educational sector through his numerous interventionist initiatives”, the Bureau said

Stating that those who seek to diminish Aregbesola’s achievements are only on a self-immolation mission, the Bureau said PDP’s inability to comprehend the current administration’s program of changing the fortune of education in the state could only help to sink the party into its abyss of extinction.

“It is gratifying that Nigerians know the PDP for what it is: a lying party and a dying party”, it added.

The Bureau noted that since the commissioning of the Osogbo Government High School on Thursday, there have been calls from far and nearby parents, who are under intense pressure from their children who desire to be enrolled in Osun schools.

Nothing could be more of a confirmation that Osun has set a laudable example on how Nigerian children should be educated, the Bureau asserted.

Concluding its statement, the Bureau said, “The PDP is a disillusioned party and when a party is disillusioned, it hallucinates and the outcome of PDP’s hallucination is this baseless criticism of Aregbesola’s historical and landmark achievements.

“The party is a rejected party that can never come back to life again in Nigeria. Its soul, to use the words of its former leader, Chief Olusegun Obasanjo, has left it long ago”, Okanlawon remarked.