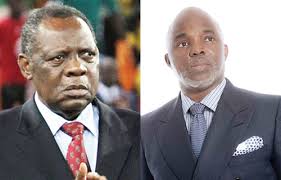 NFF President Amaju Pinnick and Secretary General Mohammed Sanusi have arrived in Cairo for Thursday’s Extraordinary General Assembly of the Confederation of African Football. The Extraordinary General Assembly, to be addressed by CAF President, Alhaji (Dr.) Issa Hayatou, will take place at the imposing Marriott Hotel Zamalek in Cairo’s city centre.
Among items on the agenda is the election of two additional African members to the FIFA Council (formerly known as FIFA Executive Committee), as well as a proposal by the Football Federation of Djibouti for the modification of article 18.3 of CAF Statutes regarding the candidacy to the Presidency of CAF.

CAF’s two vice presidents, Suketu Patel and Almamy Kabele Camara, as well as Ghana FA president Kwesi Nyantakyi, are among those in the race for the two slots to the FIFA Council. Article 18.3 of the CAF Statutes, which the Football Federation of Djibouti is seeking modification, reads: Only member associations are empowered to propose candidacies to the function of CAF President. A candidacy to the function of CAF President is valid only if it is supported by at least five member associations.

The candidate with the declaration of support of at least five member associations, a candidate to the function of CAF President must have played an active role in football as an official member of a member association, during four of the last five years preceding the submission of candidacy, and the candidate will have the obligation to go undergo an eligibility check.