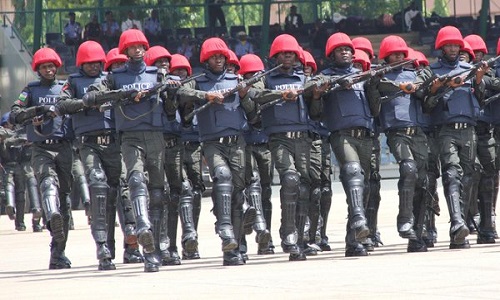 Eye witness told the News Agency of Nigeria (NAN) in Kano that the incident happened around 8:00 a.m., when staff of the company staged a peaceful protest.

It was gathered that the protesters were demanding for the establishment of a union, which the management of the company was not in support of.

However, trouble started when one of the policemen deployed to the area to maintain law and order allegedly opened fire on the protesters.

One of the protesters was said to have been injured which prompted the aggrieved workers to beat the policeman.

It was also learnt that both the injured worker and the policeman were rushed to the hospital for treatment.

He said for the past three days the police were trying to maintain law and order at the company following disagreement between the workers and management of the company over the issue.

He, however, denied reports that the police shot one of the protesters during the fracas.

“The police used only blank ammunition or robber bullet and tear gas to disperse the protesting workers, who turned violent,” he said.

He said the situation had been under control, while security was beefed up in the area.

Majiya said one of the policemen was also injured during the incident but had since been treated and discharged, while the injured worker was receiving treatment at the hospital.
Source: NAN