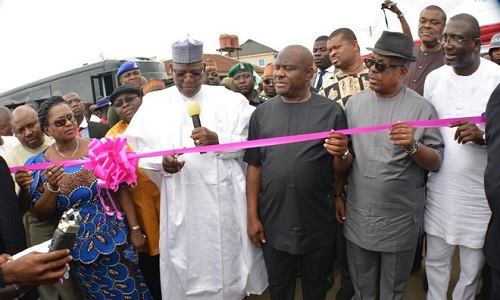 The immediate past Governor of Jigawa State, Alhaji Sule Lamido has extolled the leadership qualities of Governor Nyesom Wike of Rivers State, urging the leadership of the ruling All Progressives Congress to borrow a leaf from him.

The former governor spoke at the commissioning of the reconstructed Ozuoba-Rumosi road in Obio/Akpor local government area of Rivers on Tuesday.

According to a statement by Simeon Nwakaudu, the media aide to Wike, Alhaji Lamido, who recently took a swipe at President Muhammadu Buhari over the economic recession, advised members of the APC at all levels to learn the art and science of leadership and projects delivery from the Rivers governor.

Lamido, who commissioned the road, blasted the leadership of the APC for learning on the job after their electoral victory, pointing out that they have embarrassed Nigeria on the global stage through their failure to work for Nigerians.

He said: “Only PDP Governors are working. We in PDP, care and we are concerned. If we are giving a responsibility, we discharge it creditably. Governor Wike has done very well.  I extend the gratitude of the entire PDP family to Governor Wike for his performance”.

The former governor called on Nigerians to build understanding amongst themselves for the promotion of unity, peace and prosperity.

In his remarks, Wike urged leaders not to make excuses as the people expect them to deliver on their campaign promises.

“Whether there is economic recession or not, I will always fulfill my campaign promises to the people of the state.

“The people have played their part by voting us. Therefore, we have a responsibility to work for our people. They don’t deserve excuses”, he said

Governor Wike explained that the Ozuoba-Rumosi road is a direct reward to the people of Akpor Kingdom for their support, adding that the community was forgotten by the previous administration, hence his resolve to reconstruct the road linking them with their kith and kin in neighbouring communities.

Speaking earlier, the Rivers Commissioner for Works, Mr. Iheanyichukwu Harrison, said the road was so deplorable that the people of the area were cut off from their neighbours.