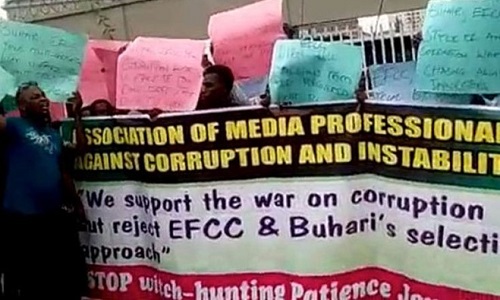 A group of protesters on Tuesday morning stormed the Federal High Court, Lagos, to protest against what they described as one sided and media trial of Patience Jonathan, Nigeria’s erstwhile First Lady.

The protesters, who gathered under the aegis of Association of Media Professionals Against Corruption and Instability, said President Muhammadu Buhari must be fair in his anti-corruption war.

The protest took place at a time the court was sitting on the matter involving a former aide to ex-President Goodluck Jonathan, Waripamo-Owei Dudafa, who is being arraigned before Justice Babs Kuawumi, over another 17 counts charge preferred against him by the Economic and Financial Crimes Commission, EFCC.

He is also facing another charge over alleged money laundering to the tune of $15m.

But the former first lady had since claimed that the $15m belongs to her.

The protesters, numbering about two dozen, who stormed the court around 11am, carried various placards with inscription like: “EFCC stop the trial or ordeal on Patience Jonathan”, “Buhari, EFCC, your style of anti-corruption war is chasing away investors”, “stop witch hunting Patience Jonathan”, among others.

Leader of the protesters, Igho Akeregha, said the group supports the anti-corruption campaign of the present administration under the condition that the president will probe past leaders.

According to him, the current trial of some former aides of Jonathan is a “systemic” plan by the present government to take over the ex-president’s family assets using the EFCC.