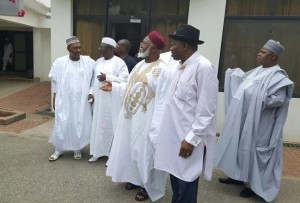 The reason why immediate past President of Nigeria, Goodluck Ebele Jonathan visited former military ruler, Ibrahim Babangida, and a former military Head of State, Gen. Abdulsalami Abubakar, separately at their Hilltop residences in Minna, the Niger State capital on Tuesday has been revealed.

According to Punch, Jonathan arrived Babangida’s residence at about 11am and spent about one hour with his host before he left for Abubakar’s house situated right opposite IBB’s home.

It was reported that Babangida received Jonathan in his private living room as against the common visitors’ room located downstairs where he usually receives ordinary visitors. 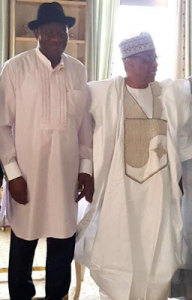 All the details of the meeting have not been made known yet, but it was gathered that the meeting might not be unconnected with the President Muhammadu Buhari’s anti-corruption war and how it had been affecting Jonathan’s close relations, particularly his wife, Patience.

It was also gathered that Jonathan might have discussed the postponed Edo State governorship election, the 2019 general election as well as the state of affairs in the People Democratic Party.

Punch further reported that IBB and Abdulsalami in the separate meetings with Jonathan raised concern over the spate of bombings going on in the Niger Delta by the Niger Delta Avengers and the need to stop the trend.

A situation he promised to address if they could put in word for him with the current President.

Jonathan was accompanied by a former Minister of State for Finance, Bashir Yuguda, and his former Chief of Staff, Chief Mike Oghiadome.