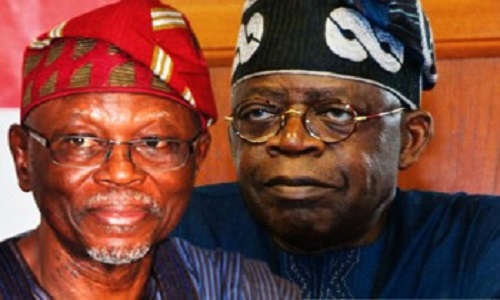 The embattled National Chairman of All Progressives Congress, APC, Chief John Odigie-Oyegun, has promised not to join words with the national leader of the party, Asiwaju Bola Tinubu, over the former Lagos state governor’s call for his resignation.

Mr. Tinubu had made the call in response to Oyegun’s alleged manipulation of the Ondo APC governorship primary, which was won by Rotimi Akeredolu.

The former Lagos governor, in apparent disgust with happenings in the party under the leadership of Oyegun, for the first time, publicly acknowledged his informal title of ‘national leader’ and also rejected same until the issues he raised are resolved.

In his response to Tinubu’s grouse against him, Oyegun said the former governor is a well-respected leader of the governing party, as such, he would not engage in a public spat with him.

Speaking at a political function in Benin City, the Edo State capital, yesterday, Mr. Oyegun said the governorship election in his home state, coming up tomorrow Wednesday, was his major priority even as he assured that “I don’t joke with my credibility”.

He said: “Asiwaju is a well-respected leader of the APC and as such, I cannot be heard speaking evil against him.

“You know we have a crucial election here in Edo which is my priority right now. I don’t want to lose focus and I know Asiwaju also wants us to win because we all worked hard for this. So may be after the election if there is need, I will speak if there is no need, I will relax”.

The APC chair, however, said most of the things reported about him especially in the media are untrue.

“I have always believed in internal democracy; that the credibility of primary must be taken seriously. I believe that if the primaries of parties are not credible, it may derail any democracy, so I don’t play with these things at all.

“Everybody knows me and I don’t joke with my credibility and I have tried to maintain it. Like I said, Asiwaju is our leader and we all hold him in high esteem, so I will never join issues with him”, he stated.

Mr. Oyegun hinted that after the Edo elections, after the APC must have emerged victorious, he may speak on some of the issues raised by Mr. Tinubu.

“So there is no problem at all. Edo is the focus for now and as you know this is my state, so it is a very serious election for us. So I want to be allowed to remain focused; then after the election we can speak”.