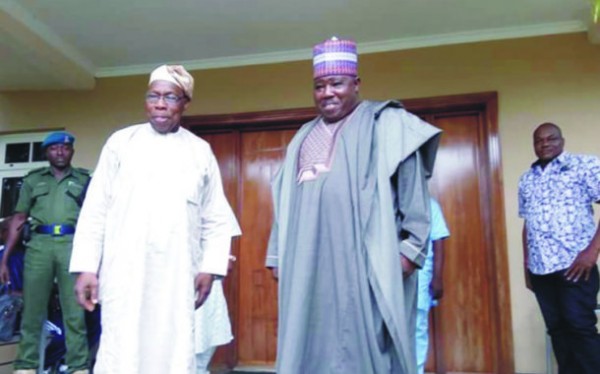 Governor Ayodele Fayose of Ekiti State had described Saturday’s visit of factional National Chairman of the Peoples Democratic Party, PDP, Senator Ali Modu Sheriff to former President Olusegun Obasanjo, as a coming together of collaborators in the total annihilation of the PDP.

He said it was on record that both men collaborated in the time past to destroy the All Nigeria Peoples Party, ANPP, and their meeting yesterday, was in furtherance of their plot to destroy the PDP.

Mr. Sheriff had on Saturday paid a visit to the former president at his residence in Abeokuta, Ogun State capital, to seek Mr. Obasanjo’s counsel on the crisis currently bedeviling the PDP.

Sheriff is currently locked in a protracted leadership battle with the Senator Ahmed Makarfi-led National Caretaker Committee of the PDP, which is backed by the party’s governors, Board of Trustees and other major organs of the party.

Reacting to the visit through his Special Assistant on Public Communications and New Media, Lere Olayinka, Governor Fayose said, “Sheriff can as well begin to sleep in Obasanjo’s house, it is good riddance to bad rubbish.

“Since Obasanjo is no longer a member of the PDP and he has consistently maintained that he can never return to the PDP, only those in the same league with him can go about visiting him”.

The governor said it was hypocritical and deceitful for Sheriff to have said he went to see Mr. Obasanjo to seek advice on the way forward for the PDP because he (Obasanjo) was among those who made the PDP to lose the Presidency, despite the fact that no one benefited from the party more than him.

Fayose the embattled factional chairman only visited Mr. Obasanjo as part of his plot with the governing All Progressives Congress (APC) to destroy the PDP, adding that; “no genuine lover of the PDP will go to the house of a man who openly destroyed his PDP membership card and worked assiduously to ensure the party’s failure in the 2015 presidential election to seek advice on how the way forward for the PDP”.

He reiterated his call to Nigerians to beware of Mr. Obasanjo, saying; “The result of Obasanjo’s imposition of President Muhammadu Buhari on the country is the hunger and sufferings that Nigerians are facing now”.