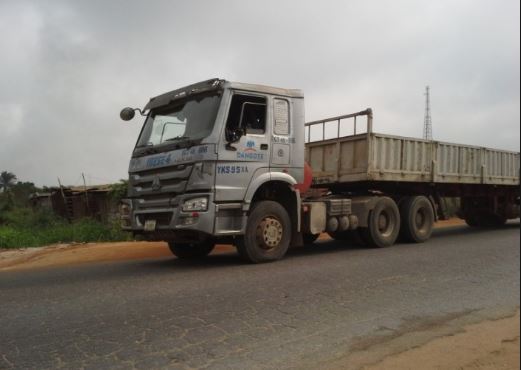 A trailer driver, Kabiru Ademola, has been arrested by the police for allegedly crushing a pedestrian to death in the Mushin area of Lagos State.

PUNCH Metro learnt that the driver was speeding with another truck when he lost control around 2.30am on Sunday and killed the victim, identified as Kamoru Ibrahim.

Our correspondent was told that the IVECO trailer, with number plate, KRD 630 XP, also hit a Toyota Camry parked by the roadside in the area.

Officials of the Lagos State Fire Service, Lagos State Emergency Management Agency and Policemen from the Alakara division responded to the incident.

The Director of the Lagos State Fire Service, Rasak Fadipe, said the Isolo fire station got to the scene first, adding that when the firefighters couldn’t do anything, they alerted LASEMA.

A LASEMA official, who did not want to be identified, said the incident happened around 2.30am.

He said, “The accident happened on Agege Motor Road, Mushin. The trailer carried gravel and the driver engaged in a race with another truck. In the process, the driver crushed a 38-year-old pedestrian, Kabiru Ademola. The man was trapped under the truck and we had to use our equipment to extricate his remains from the trailer. The trailer also damaged another car parked by the roadside before coming to a halt.”

The Police Public Relations Officer, SP Dolapo Badmos, said the suspect was in police custody, adding that the victim’s corpse had been deposited in a morgue for autopsy.

“The trailer veered off the road and hit the pedestrian, who died on the spot,” she said.