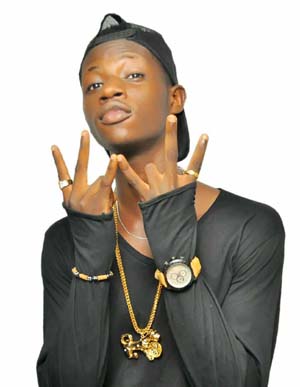 19 year-old Fredrick Alasa, aka Freddy Young, from Edo State, schooling at Zenith University College, Accra, Ghana, has the odds stacked against him but he is determined to make it as a musician because he has got what it takes to make it. In fact he believes he has what it takes to overtake the likes of Wizkid, Olamide or Davido in the nearest future if the odds are stacked a little in his favour.

“My plan is to get fully into the industry with a unique sound  and a unique style. I play mainly dancehall afro pop but my problem right now is that I don’t have a record label and promoters,”he said, talking about the biggest challenges staring him in the face right now.

“There is a huge competition in the industry  now. Some people  think you just go to the studio and just record. But for me, I see music as a sound that passes messages to people. So if you do good music  you will have good sales. You also need to have a good voice, but generally  I think  in Nigeria  we are doing good with the likes of Wizkids, Davido, and Olamide. Though  they are good but I can do a lot better,” he boasted but quickly added that Wizkid is his role model.

According to him, it was Iyanya that used to be his number star but said he had to opt for Wizkid because he thought Iyanya lost his touch after the ‘Kukere’ hit.

“Seriously, Iyanya used to be my number one, followed by Wizkid and Don Jazzy but Iyanya seems to have fizzled out after ‘Kukere’ while Wizkid got stronger hit after hit. After he came up with songs like “Don’t dull”, “Holla at your boy” I couldn’t Ignore him. I had to pick him as my number one”, he said. Being the 6th child in a family of 10 children and with no one to give him a good head start is not something the strapping young man sees as an excuse to quit. He is so obsessed with his music that he is ready to quit school to pursue his dream.

“Life isn’t easy the way I thought  it would be. Apart from  my parents, nobody really showed me love except my producer. I am just hustling  my music,  hoping one day I will get to the top. I am not yet making money but inspiration comes everyday. I don’t record as much as I wish to because I don’t really  pay for my songs. I don’t promote them too, so they haven’t gone far. I haven’t  shot any video and that’s bad.

“It has been difficult financially to promote my songs. I have only one out, “Ileke”and it’s online. Putting  songs online is expensive  and as a student I don’t have money to do much. Like naijaloaded charges you 25k to put your song on their site. So I just have to do the little I can till maybe I get a label who will take care of that. I am ready to do whatever it takes to follow my dream. I can even quit school to pursue my music because from day one music has been my dream but I can always go to school. I can even school online. Well music is my dream. I don’t mind crawling on the floor for music because  I know one day I will get there. I don’t  think I will be able to live in this world without music. Music is my thing and I can’t stop believing in it,” he quips.

Freddy Young has written over 30 songs but has only been able to record just 10.