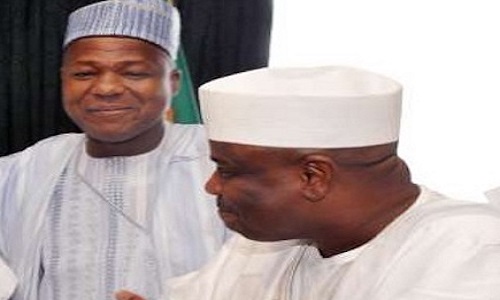 President Muhammadu Buhari on Tuesday met behind closed-doors with Governor Aminu Tambuwal of Sokoto State and Speaker of the House of Representatives, Yakubu Dogara at the Presidential Villa, Abuja.

The duo, who arrived the forecourt of the Presidential Villa in one vehicle, spent over 45 minutes in the President’s office.

They, however, declined to speak to State House correspondents on the motive of their meeting with President Buhari when they came out from his office.

While Dogara was silent on the purpose of the visit

, Tambuwal, who is the immediate past Speaker of the House, tactically evaded most of the questions from the journalists.

On whether the meeting has to do with the budget padding scandal rocking the House of Representatives, Tambuwal said: “Not at all”.

Asked if it has to do with recession and sale of assets, he replied the journalists with: “I have already aired my views on the sales of assets”.

When pressed further on whether the meeting has to do with the clash between the national leader of the All Progressives Congress (APC), Asiwaju Bola Tinubu and the party’s National Chairman, John Odigie-Oyegun, he responded with: “I don’t know about that”.

“We are here to meet Mr. President and greet him and to show our support”, Gov. Tambuwal said.