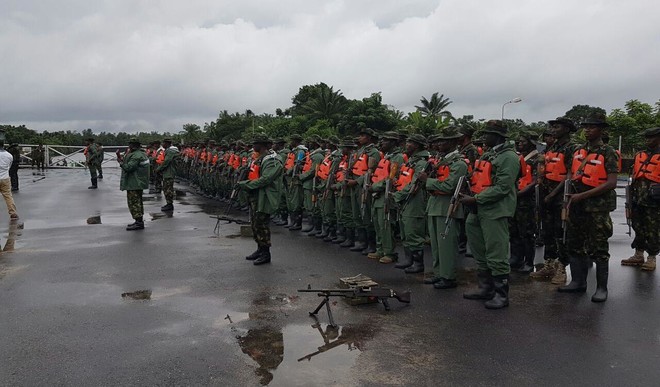 The Nigerian Army on Friday announced that its troops of the “Operation Crocodile Smile” in their ongoing conducts of field training exercise in the Niger Delta have discovered and destroyed 74 illegal refineries within the last 48 hours.

The Army also said several hideouts and camps of militants and kidnappers in various parts of Rivers and Bayelsa States using swamp buggies and other specialists equipment were destroyed.

This is contained in a statement signed by Col Sani Usman where he said “On Wednesday, 7th September 2016 troops of Sub-Sector Bravo in response to a tip off on the presence of suspected kidnappers at Akupoku community, carried out a raid at the location.

“But no arrest was made as the kidnappers have fled the area.

“However, the team also raided Ke community, at the verge of the Atlantic ocean where they discovered and destroyed an illegal refinery.

“The troops exercising along Abonnema axis were also informed of the presence of suspected kidnappers at Abakrikri Fishing Pot, they swung into action and carried out cordon and search operation, however, no contact or arrest was made.

“Although no contact was made, the troops recovered an AK-47 rifle empty magazine, 6 face masks, 1 machete and several empty shells of expended ammunition.

“The troops have also intensified search for the kidnappers nests and other criminal elements camp for clearance”.