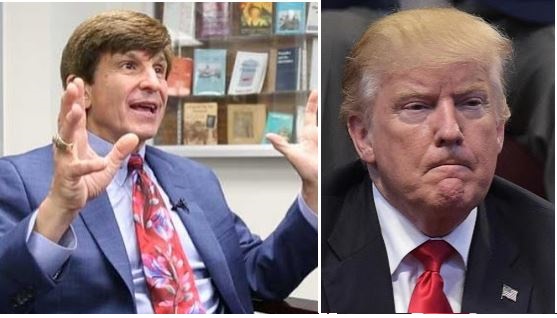 Professor Allan Lichtman, a distinguished professor of history at American University, Washington D.C, has correctly predicted the winner of every U.S presidential election since 1984 and has now said he is certain that Republican candidate Donald Trump will win the November 8 election and also explained how he came to the decision…

According to Lichtman, his prediction isn’t based on horse-race polls, shifting demographics or his own political opinions but he uses a system of true/false statements he calls the “Keys to the White House” to determine who will win the election and it’s always worked since 1984.
The keys to the White House, which are explained in depth in Lichtman’s book “Predicting the Next President” are:
1. Party Mandate: After the midterm elections, the incumbent party holds more seats in the U.S. House of Representatives than after the previous midterm elections.
2. Contest: There is no serious contest for the incumbent party nomination.
3. Incumbency: The incumbent party candidate is the sitting president.
4. Third party: There is no significant third party or independent campaign.
5. Short-term economy: The economy is not in recession during the election campaign.
6. Long-term economy: Real per capita economic growth during the term equals or exceeds mean growth during the previous two terms.
7. Policy change: The incumbent administration effects major changes in national policy.
8. Social unrest: There is no sustained social unrest during the term.
9. Scandal: The incumbent administration is untainted by major scandal.
10. Foreign/military failure: The incumbent administration suffers no major failure in foreign or military affairs.
11. Foreign/military success: The incumbent administration achieves a major success in foreign or military affairs.
12. Incumbent charisma: The incumbent party candidate is charismatic or a national hero.
13. Challenger charisma: The challenging party candidate is not charismatic or a national hero.