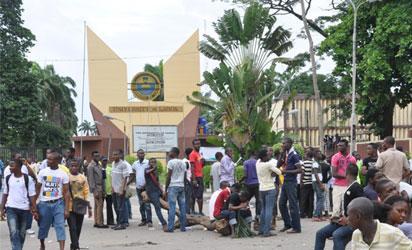 The premise of the University of Lagos, Akoka has been shut down as students of the institution are protesting the rustication of some members of its Student Union. The authorities of the school have therefore ordered the closure of the school gates.

The students are also protesting an alleged victimization by lecturers. It will be recalled that the school rusticated some leaders of the student body who lead a protest in April over bad electricity and water supply as well as difficulty faced by the students that lived off campus. The executives of the Unilag Student Union(ULSU) had earlier in the month protested the “unjust rustication” of its union members. The students are now gathered at the school’s senate building chanting war songs.