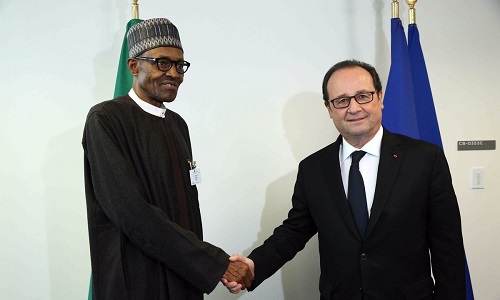 President Francois Hollande of France has reiterated his country’s readiness to invest in Nigeria.

Hollande who made the declaration on Wednesday during a meeting with President Muhammadu Buhari on the sidelines of the ongoing 71st United Nations General Assembly in New York, United States of America.

“We will invest in Nigeria, we believe in her”, the French president stated.

Hollande also pledged that France would fully engage with Nigeria on different fronts and provide humanitarian assistance in the northeast.

Earlier, Buhari had informed Hollande about the Presidential Committee on the North-East, which he described as a one-stop mechanism on development partnership for a zone ravaged for many years by Boko Haram insurgents and which needed urgent rebuilding.

The president, who welcomed more investment and economic partnerships, described Nigeria as a fertile ground for handsome return on investments.

“Apart from your country’s close relationship with us, you have the same with most of our neighbours. We seek more collaboration, particularly in agriculture, mining and security”, Buhari told Hollande.