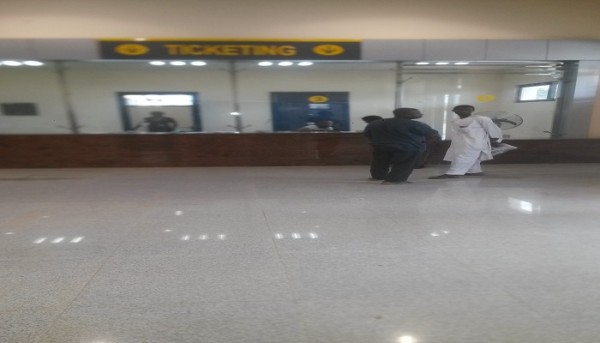 Three hours later, at exactly 10:40a.m, I decide to try my luck one more time at the Kubwa Train sub-station.

This time, as I alight from the okada that conveyed me to the station, an air of optimism enveloped me as the ‘mammoth’ crowd I encountered earlier that morning, was nowhere to be found. My heart leapt in joy within me as if I’d hit a jackpot.

I sauntered down the staircase as the beauty that is the Kubwa Train station, stood before me as if to embrace me. The private security guards stationed in front of their desk at the entrance of the departure hall were busy chatting among themselves to even notice I was passing through; maybe they did, but considered there was nothing about me to the ordinary eye that looked suspicious.

Finally, I was inside the departure hall; cozy, still sparkling new and clean. As I dropped my hand luggage on one of the many empty metal seats in the hall, my eyes quickly shift to the ticketing area, which is to the right immediately you step in and separated from the general area by this huge thick glass wall.

As I approach the area, I could see some male passengers – about three of them – engaged in a heated exchange with one of the ticketing staff, a lady, over her refusal to sell tickets to board the train, which I later discovered, was not returning from its trip to Kaduna, until after three hours. There’s only one train with four coaches that makes the shuttle between Abuja and Kaduna.

SEE ALSO: What You Weren’t Told About The New Abuja-Kaduna Rail (1) By Ayodele Daniel

I immediately waded into the verbal exchange. “Can you guys be civil please? The situation does not call for a shouting match”. As if I was some sort of authority, both parties cease fire and look in my direction as if to size me up. “What is the problem?” I ask. The ticketing lady explains: “Sir, the two ladies you just saw walk in before you were here earlier this morning and I could not follow the first train because it was already filled. They asked me to reserve two tickets for them because they were going to come back for the afternoon ride and that was what I did but these men thought I was selling tickets to the ladies and refusing to sell to them”.

She went further to beckon to the ladies over the microphone to come over. And when they did, she asked in my presence and that of the other men, “Do I know you from anywhere? Have we ever met before today?” to which the ladies answer in the negative, confirming that they were at the train station earlier but could not make the first train. They returned to their seats.

I now pleaded with the men to remain calm as I asked the lady why she was not selling tickets for the afternoon train.

“Dem done call us from Idu Station (the Abuja-Kaduna Train’s terminus) say make we no sell tickets until dem finish from there, then dem go tell us to begin sell for here. Na wetin I dey explain to these men before you come”, she responded in pidgin, apparently feeling relaxed.

My curiosity was aroused: “why would they do that? I was also here earlier in the morning and could not get on the first train, please, you people should sell us tickets oo!” From her explanations, the management decided to stop the Kubwa sub-station from selling tickets until the train has taken off from Idu with its passengers during which the remaining unfilled seats, if any, would be made up for at the Kubwa, Jere, Rijana, Dutse and Kakau sub-stations respectively.

Apparently, there were incidences in the not-too-distant past where the train was already filled up from Idu and on getting to Kubwa, passengers that had already bought their tickets, were screened to board the train – standing! Yes, the 49 sitting, 99 standing problem had crept into our new rail service.

To nip the problem in the bud, the management of the Nigeria Railway Corporation introduced the archaic measure of not selling tickets to passengers in the Kubwa sub-station (don’t know of the other sub-stations) until Idu has had its fill of passengers. You’ll soon see why I called this measure “archaic”.

Feeling my heart beat faster, I asked, “… but is there possibility that you guys will still sell tickets for the afternoon train?” to which she answered in the affirmative, then I informed her I would be needing the first class ticket whenever she receives directives to resume selling. “Sir, just take your mind off first class. It would be fully booked from Idu. You can get second class, but first class, no way!”

“Ha! Are you saying if I want first class I have to go to Idu?” I fired back. “Yes. But you know its weekend, just as you’re here, there are other passengers there too and they’re much. I don’t think you’ll get”.

As the reality began to hit me, she gave me what seemed like a re-assurance, a genuine one: “since you’re here now and I’ve seen your face, once they call from Idu that we should start selling, you’ll be one of the first to get a ticket, but not first class”. I thanked her for her thoughtfulness and went to locate my seat, where I’d dropped my hand bag earlier, as I began to count down the hours till 2p.m.

As I sat down, I decided one of the best ways to use my time was to take some photographs and embark on an inspection tour of the facilities at the Kubwa train sub-station.

I observed that the departure hall was not only spacious, well-lit and well-kempt, it had litter bins, could comfortably sit 81 people at the same time, had four giant industrial fans, a changing room, male and female toilets, a toilet for the disabled and two prayer rooms (one for male and the other for female).

May be it is too early to judge but the neatness of the Kubwa Train sub-station is pristine and the male toilet, inclusive of urinals (of course I couldn’t say of the female toilet since I’m not permitted to enter but I doubt it’d be in any less condition), aside being very clean and smells fresh – you could eat there if you want – has functional taps, with running water.

My attempt to ‘inspect’ the arrival hall was rebuffed by a police officer, who politely asked me to exit the area as it was meant for only arriving passengers. I complied but not before I sought his permission to take photos, which he gladly obliged.