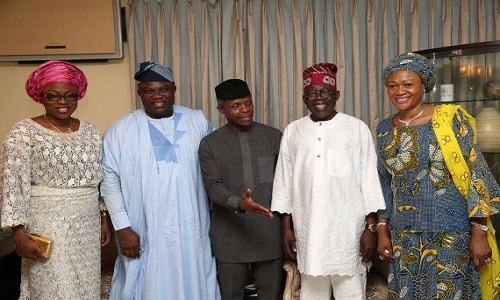 A former Lagos State Governor and National Leader of the All Progressives Congress, APC, Asiwaju Bola Tinubu, said yesterday that Lagos has political and economic stability because of a solid foundation.

He told reporters after observing the Eid prayers at Dodan Barracks praying ground in Lagos that lack of solid foundation was the bane of the nation’s current economic woes.

“The political and economic stability we are enjoying in Lagos today is as a result of a solid foundation”, he said.

“Without a good and solid foundation, we cannot achieve a sustainable economic prosperity”.

On the hardship sweeping across the country, the APC national leader said “We need to re-strategize and re-plan, but that planning period is always a very difficult period in any family, organisation and nation.

“That is what we are experiencing now, but it is for a better and stronger future”.

Speaking with reporters too after observing the Eid prayers, Lagos State Deputy Governor, Mrs. Idiat Adebule, urged Nigerians to uphold the significance of Eid-el-Kabir, total trust and obedience to God, to accelerate the pace of economic recovery.

Adebule also urged them to celebrate peacefully and reach out to the less-privileged among them.

“We can only enjoy Allah’s favour when we totally trust and obey His will. He is our creator and He knows what is best for us as individuals and as a nation”, Mrs. Adebule said.

House of Representatives Leader, Femi Gbajabiamila, also spoke to reporters, urging them to convey a message of hope to Nigerians.

“I urge us to be prayerful and by God’s grace we shall get better and stronger as a nation”, he said.