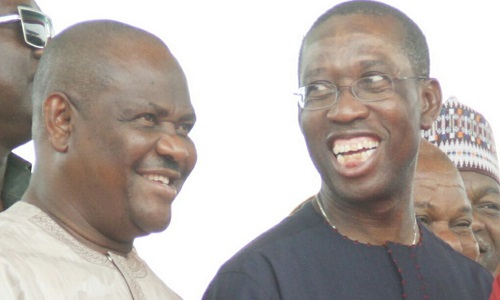 He also alleged that the governors have raised N2billion for the Peoples Democratic Party (PDP) candidate, Pastor Osagie Ize-Iyamu, “at a time they cannot pay salaries in their states”.

Oshiomhole said the APC was ready for a peaceful election and not violence.

The governor made these strong allegations when he received the National President of Nigeria Union of Journalists (NUJ), Waheed Odusile, in his office on Thursday.

Gov. Oshiomhole said he had raised the alarm about the decision of Okowa and Wike to make Edo ungovernable during the election and perpetrate violence by exporting militants from some of the South South states.

“As we speak, both governors have raised N2billion to give to Ize-Iyamu when they could not pay salaries in their states. They mobilised militants to Edo to register, preparatory to use them for violence in this election. We have eliminated violence in our elections here but in my election in 2007 PDP members killed three people at Oba primary school and brutalised hundreds of others. But there after we have ensured free and fair election in Edo State.

“But we have asked our people to be on the watch out, during the continuous voters registration exercise, many of them came into town and to my shock INEC registered many of them. But at least we were able to apprehend 13 and we handed them over to the police. During the same period in Etsako Central, they carried data capturing machines and turned private residence to registration centers. We did not take laws into our hand, we reported to the police.

“The guy whose house was being used, we reported to the police. We insisted that the police should charge them to court and after they did that they were granted them bail. And all these are PDP players.

“In the course of distributing the PVCs last week at Igueben, Some PDP thugs came to forcibly hijack PVCs from the officer that was distributing them at a school in Igueben and he ran into the residence of the PDP leader. Those PVC cards were recovered by the DSS.

“As we speak many militants have been imported into Edo state and the security agents are aware of this. For us we are ready for the election but we know that PDP has perfected plans to unleash violence. If you watch their public pronouncements, Ize-Iyamu has talked about cancellation and inconclusive elections.

“As we speak I do not know what has been done about the EO that made the data capturing machine available for illegal registration in private residence. We want a peaceful environment to be able to get our people out to vote”, he said.

As at the time of publishing this report, the governors of Delta and Rivers States were yet to respond to the allegations leveled against them by Oshiomhole.