Not less than 14 people have been killed in a Shiite mosque in Kabul, Afghanistan by gunmen on Tuesday. 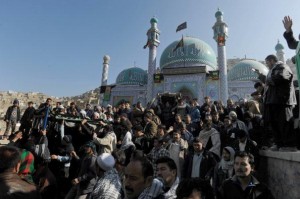 The gunmen were reported to have walked into the mosque and opened fire – killing more than a dozen people and wounding many others inside, including police officers.

Multiple perpetrators were involved in the attack, and all had been killed by police.

“Police have evacuated dozens of people from the shrine. A number of civilians and police have been injured.”

The gunmen were said to be three in Afghan security forces uniforms. They stormed the shrine and started shooting as hundreds gathered there.

The attack happened as the Muslims celebrated the beginning of Ashura on Tuesday – the second holiest month after Ramadan. Ashura begins on the tenth day of the first month of the Islamic calendar.

Sunnis and Shiites celebrate Ashura differently. For Sunnis, it marks Moses being saved from the Egyptians by Allah. For Shiites, it’s a more sombre occasion that marks the day Imam Hussein, a grandson of the Muslim prophet Muhammad, was murdered in what’s now Iraq.