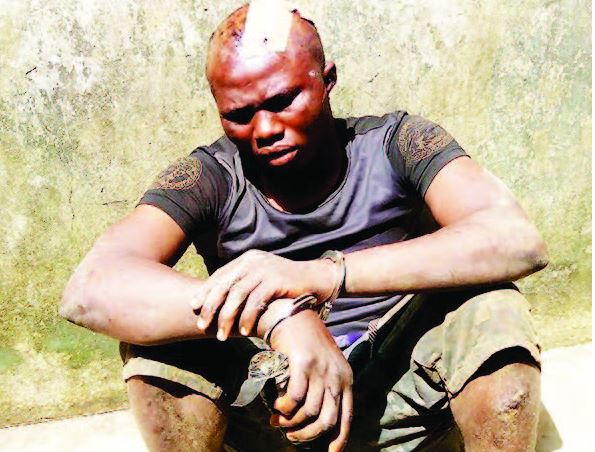 Some gunmen suspected to be cult members have invaded Borno Way in the Oyingbo area of Lagos State and abducted a 16-year-old boy, Abuchi Umechime.

PUNCH Metro learnt that the four assailants, who were armed, abducted the teenager around 10pm last Wednesday.

This is just as two armed men attempted to rape a girl in her parent’s house in the Igando area on Sunday, injuring the father who prevented them.

Our correspondent gathered that in the Oyingbo incident, the gunmen shot sporadically, discouraging residents from coming to Umechime’s aid as they took him away.

They were said to have held him over the night, before releasing him around the Third Mainland Bridge, in the Okobaba area on Thursday.

It was learnt that the matter was reported at the Denton Police Division.

Our correspondent learnt that police operatives from the division combed the area till around 6am on Thursday before the boy was found.

One of Umechime’s neighbours, who did not want her name in print, said, “I heard gunshots around 11pm. Later, I saw armed men dragging the boy away. After the attack, none of us could sleep. We searched the area, but our efforts were unsuccessful.”

A police source told our correspondent that Umechime was found by the operatives around the Okobaba end of the Third Mainland Bridge.

He said, “The hoodlums did not give any reason for abducting him. The police initially combed Evans Square, but we did not get them.

“The boy was found around 6am on Thursday. He was abandoned. He was not injured.

“The victim had been reunited with his mother. The son had not told us why they took him away.”

The teenager, who was barely able to talk, said the assailants took him to a hideout in the Obalende area.

He said, “They took me away on a motorcycle. I was kept till the following day. They later gave me N100 to return home.”

The Lagos State Police Public Relations Officer, SP Dolapo Badmos, said, “Operatives from the Denton division rescued the boy in the Obalende area. The police are on the trail of the fleeing gunmen,” she added.

In the Igando incident, it was gathered that the two armed men attempted to rape the girl in a house on Ismail Abass Street.

PUNCH Metro learnt that one of the attackers, identified as Akeem Folorunso, was arrested by the Igando Police Division.

A resident, Tunde Rimisa, said the incident occurred around 5pm, adding that the girl’s father was injured in the head.

He said, “The men were suspected to be robbers. When they entered the house, they found the girl and attempted to rape her. The father wanted to prevent them from defiling his daughter and they attacked him.

“I was one of those who put distress calls across to the police. One robber escaped, but the other was arrested.”

The police spokesperson, Badmos, said investigation was ongoing on the matter.

She said, “The suspect was about to be mobbed, but the police rescued him. The state Commissioner of Police, Fatai Owoseni, has directed that the matter be transferred to the Special Anti-Robbery Squad, Ikeja. The police are on the trail of his accomplice.”