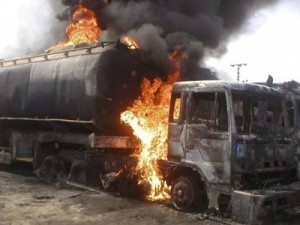 Over 50 petroleum tankers in Delta state have been reported to have been ruined in a fire outbreak that occurred at a park.

The inferno which is reported by Punch to have begun at about 7pm on Friday occured at the Ekpan Tankers Park near the Warri Refinery in Uvwie Local Government Area of Delta State.

The fire was said to still be burning at about 10am on Saturday.

Several firemen from the Delta State fire service, the Nigerian Gas Company fire department, the Warri Refining and Petrochemical Company, and Chevron were reported to still be battling to put off the fire.

The incident created heavy gridlock along the expressway as many residents deserted their homes in fear.
AdvertisementClick Here To Join The 10,000 Naira Giveaway For 100 People!