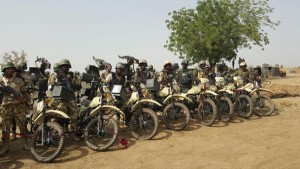 In its bid to tackle insurgency especially in rough terrains and reduce the response time to emergencies, the Nigerian Army has launched ‘Operation Motorcycle Battalion‘.

The operation is aimed at the use of motorcycles in its battle against insurgency.

The Commander, Operation Safe Haven, Major-General Nicholas Rogers, who launched the motorcycles in Riyom Local Government Area of Plateau State yesterday, said: “The launch of Operation Motorcycle Battalion is as a result of the fight against insurgents and the essence is to reach areas where vehicles cannot reach and also the areas where we have challenges on foot patrol.

“The motorcycles have the capacity to move faster  to meet up with the challenges of insecurity in the hinterlands, where movement of motor vehicles are restricted and also to reduce response time.”

The motorcycles are to be deployed to Barking Laid, Mango, Wise and Riyom Local Government areas, which are flash points with difficult terrains.