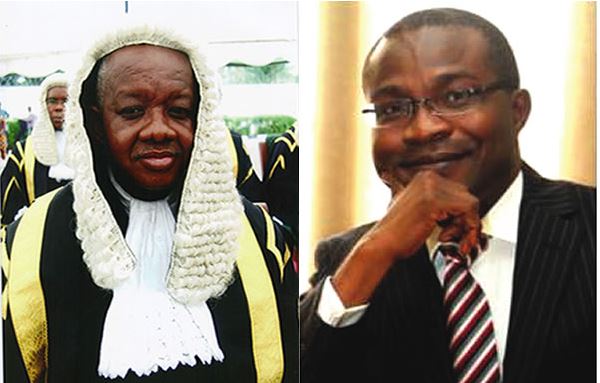 A Lagos-based lawyer, Mr. Olukoya Ogungbeje, has filed a N50bn suit against President Muhammadu Buhari, the Department of State Services and its Director-General, Lawal Daura, along with others for allegedly violating the rights of judges whose houses were raided by the DSS operatives between October 8 and 9.

Others joined as defendants in the suit, with number FHC/ABJ/CS/809/16, are the Attorney General of the Federation and Minister of Justice, Mr. Abubakar Malami (SAN); the Inspector-General of Police, Ibrahim Idris; and the National Judicial Council.

Ogungbeje filed the suit before the Federal High Court in Abuja on Friday, October 14.

He alleged that the arrest of the judges without recourse to the NJC was unlawful and amounted to humiliating them.

The plaintiff sought 10 prayers, among which is an order awarding N50bn against the defendants as “general and exemplary damages.”

He also sought to be awarded N2m as the cost of the suit.

The lawyer also sought an order compelling the DSS to return to the judges the sums of money reportedly recovered from them.

He also sought a perpetual injunction restraining the defendants from arresting, inviting, intimidating or harassing the judges with respect to the case.

Justice Nnamdi Dimgba’s residence was also searched but he was not arrested.

Others, who were arrested, had been placed on suspension by the NJC pending the time Buhari and the various state governors would approve its recommendation for the sacking of the affected judges.

They are a former Chief Judge of Enugu State, Justice I. A. Umezulike; the Presiding Justice of the Court of Appeal, Ilorin Division, Justice Mohammed Tsamiya; and the judge of the Kano State High Court, Justice Kabiru Auta.

The DSS said it recovered large sums of money in Nigerian and foreign currencies from three of the judges during the raids on the houses of the seven judiciary officers.

The seven of them had since been released on self recognition by the DSS.

But Ogungbeje’s suit is restricted to five of the arrested judges, who are still in active service – Justices Ngwuta, Okoro, Ademola, Pindiga and Dimgba.

The plaintiff contended in his suit that the raids on the residences of the judges and their arrest were unconstitutional.

He maintained that the arrest of the judges did not follow the law.

He stated in a 39-paragraph affidavit, which he deposed to in support of the suit,

“That the 6th respondent (NJC) is the only body empowered by the Constitution of the Federal Republic of Nigeria to discipline judges and judiciary officers in Nigeria.

“That the judiciary is an independent arm of government in Nigeria and separate from the executive and the legislature.

“That this illegal and unconstitutional action by the 1st (President Buhari), 2nd (DG of DSS), 3rd (DSS), 4th (AGF), and 5th (Inspector-General of Police) respondents have been roundly condemned by the Nigerian Bar Association.

“That the 2nd (DG of DSS), 3rd (DSS), and 5th (IGP) respondents carried out their action which brazenly infringed upon the rights of the affected five judges without lawful excuse or recourse to the 6th respondent.”