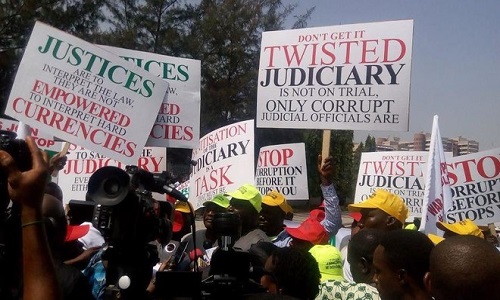 Protesters on Wednesday besieged the premises of the Supreme Court of Nigeria, demanding that all judges arrested by the Department of State Services (DSS) in a sting operation, step aside, pending the outcome of their trials in court.

The DSS had over two weeks ago, arrested seven judges across the country. They are Justice Sylvester Ngwuta and Inyang Okoro – the suspended Presiding Justice of the Court of Appeal, Ilorin Division; Justice Mohammed Ladan Tsamiya, who was picked up in Sokoto; Justice Adeniyi Ademola (Federal High Court); the Chief Judge of Enugu State, Justice I. A. Umezulike; Justice Kabiru Auta of Kano State High Court; and Justice Muazu Pindiga (Gombe State High Court).

The Service had accused the judges of engaging in corrupt practices, a claim the National Judicial Commission, NJC, denies.

The protesters, who marched on the Supreme Court premises in Abuja, carried placards with various inscriptions such as: “Stop corruption before it stops you”, “Don’t get it twisted, Judiciary is not on trial, only corrupt officials are”, “Justices are to interpret the law, they are not empowered to interpret hard currencies”, among others.