Islamic militant group Boko Haram has released twenty-one of the Chibok girls it kidnapped back in April 2014, it has been reported. 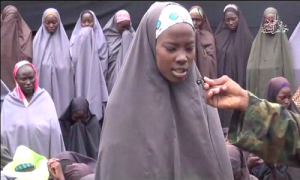 The released girls have been handed to the Nigerian government.

Sahara Reporters quoted a government source saying the girls were dropped off by Boko Haram militants earlier today at the Banki area of Borno state, and were later picked up by military helicopter.

The Federal Government has recently expressed its desire to negotiate the release of the abducted schoolgirls.

The girls were last seen in a video posted by the jihadist group in August, featuring its new leader appointed by Islamic State, Abu Musab al-Barnawi.

Boko Haram has given conditions including the release of its detained fighters in exchange for the schoolgirls. It is yet to be known if there was any exchange of sort.

President Muhammadu Buhari has however headed to Germany to discuss assistance in dealing with terrorism and militancy.