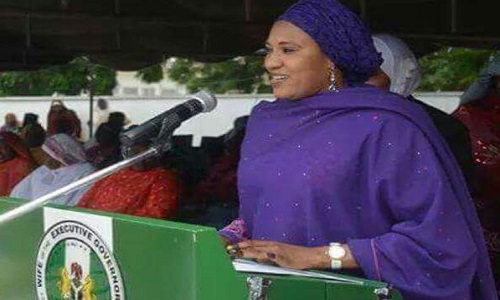 Mrs. Shettima made the plea while on a visit to some of the IDPs camps on Tuesday to monitor a special

The feeding programme is being financed

The donation was sequel to a visit to the IDPs camps in Maiduguri, the Borno State capital by the committee last week. The money

was meant to help the children below 7 years feed properly.

The wife of the Borno governor said feeding the IDPs has been a heavy responsibility for the state government and may even become a burden in the days to come; especially now that the state government is pulling all resources together to ensure that liberated communities are rebuilt.

She, therefore, called on more support from well-meaning Nigerians and international NGOs to support the state and federal government’s efforts in making sure that the IDPs live and feed well in their respective camps.

“Of all the states in the Northeast, Borno is one of the states that suffered worst devastation due to attacks by insurgents in the last six years”, she said. “So we will continue to plead to all well-meaning citizens of the world to support us providing support towards the needs of the displaced people”.

Mrs. Shettima, who spoke to journalists at Dalori IDP camp as well as at another camp run by the Christian Association of Nigeria, said she was impressed with the quality of beans being cooked for the minors as part of their breakfast.

“My mission here is to visit the camps to monitor how the beans that was purchased with the N2 million donated by Senate committee on Women Affairs and officials of the Future Assured for feeding of our children in camps. We all know that beans have a high rate of protein, which is good to the health of our children.

“I want to sincerely thank

this committee for not only visiting our state to see our IDPs, but for also initiating weekly feeding of our children in camps with protein supplement. I am much satisfied with the quality and quantity of the beans being served in all the camps, and I want to assure that, this initiative is going to be a continuous one.

or kind to enable it cater for our IDPs because government is doing enough to see that all our destroyed communities are being reconstructed for displaced people to go back home”, she said.