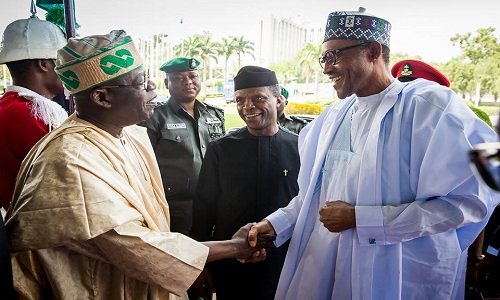 A stalwart of the governing All Progressives Congress (APC), Asiwaju Bola Tinubu, says while President Muhammadu Buhari was in a hurry as a military ruler, he is now slow but steady in his approach to governance.

Mr. Tinubu, a former Governor of Lagos, gave this assessment of the president at the International Conference Centre, Abuja yesterday during the public presentation/book launch of “Muhammadu Buhari: The Challenges of Leadership in Nigeria”, authored by a professor of International Studies, John Paden.

The APC stalwart, while reviewing the book, said the author “notes that in terms of style of leadership, Buhari, as a young military Head of State, was in a hurry. However, now that he is older and given his experience, he is slow but steady in his approach to governance”.

Tinubu said Buhari surprised many during the presidential election campaign “with his agility and the broad canvas on which he operated”, adding that “In tracing the evolution of Buhari, the national leader, the author’s assertion that military rule is based on the power its holders can wield, while civilian rule is based on the legitimacy derived from elections is a point with which I dare not debate.

“Buhari’s career embodies this, hence his transition from being a military ruler to being a civilian leader who subjected himself to the rigours and uncertainty of elections four times. Thrice, he patiently went to court, seeking redress from electoral manipulation.

“The author, quite accurately, remarked on the Buhari’s victory equation as flowing from northern grassroots support and coalition building with the southwest as well as with other tendencies”, he pointed out.

Tinubu also explained that the APC fielded Yemi Osinbajo, a Professor of Law as Buhari’s running mate in the 2015 general elections purposely to ensure a religiously balanced ticket.

“Based upon this conclusion, the name of a renowned professor, Yemi Osinbajo, a professor of law and former Lagos State Attorney-General during my tenure as governor was proposed and accepted as the running mate.

“Osinbajo was also a pastor in the largest church in the entire country, and this would answer those who had wrongfully tried to paint and present Muhammadu Buhari as intolerant, religiously. From this event, you can see a portrait of a president as a democrat more adept than many would think”.

The book launch was attended by prominent personalities, notable among them Vice President Yemi Osinbajo and his wife Dolapo, Senate President Bukola Saraki and his wife Toyin, Speaker of the House of Representatives Yakubu Dogara and his wife, President Mahamadou Issoufou of Niger Republic, President Patrice Talon of Benin Republic, his Chadian, Idriss Deby, former Head of State, Yakubu Gowon, who was Chairman of the occasion, former President Olusegun Obasanjo, who was Special Guest of Honour at the event while Cameroon’s Paul Biya, was represented by the country’s envoy in Nigeria.