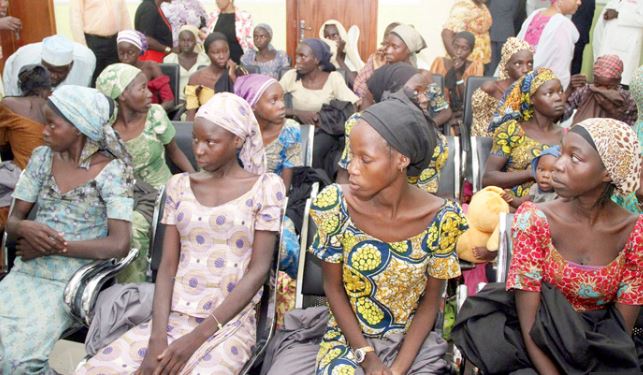 The 21 are among the over 200 girls abducted 30 months ago by Boko Haram insurgents.

The tests will cover Hepatitis B and C, malaria and sugar level.

Other stakeholders involved in the exercise and planned rehabilitation of the girls are the Peace Corps of Nigeria, a paramilitary organisation, and the Medical Laboratory Science Council of Nigeria.

While commending the Federal Government for the efforts made by the military in releasing the captives, Hadiza, who is the President of the Africa Support and Empowerment Initiative, promised to restore the lost joy and glory of the girls.

She announced the gesture in Abuja on Monday during the official inauguration and signing of a Memorandum of Understanding on the Chibok girls’ endowment fund project between the PCN and AFRISEI.

Hadiza said, “Considering the present economic situation that the country is passing through, it is necessary for the government to be assisted in ensuring that funds are raised to champion the cause of rehabilitating the released Chibok girls to a concluding success.

“It gives me a great honour to be present here today for the signing of the MoU of an endowment fund for the rehabilitation of the released Chibok girls between our organisations.”

But the #BringBackOurGirls coalition has disowned the fundraising and urged the public to disregard attempts at linking it to “this highly suspicious event.”

The group’s brand name was printed on the backdrop of the fundraising banner.

The BBOG in a statement by its Co-coordinators, Oby Ezekwesili and Aisha Yusuf, said it was not a party to the fundraising, noting that it was shocked and perplexed by the use of its name at the event.

The coalition said after 902 days of advocacy for the release of the abducted Chibok girls, it was disheartening to see attempts by external actors to use its name for selfish purposes.

The movement noted that it had carefully built its reputation as “a well-organised and disciplined global movement that is completely self-funded,” adding that it had contacted its lawyer, Femi Falana, and was considering a response to the attempt to smear its name.

The statement partly read, “We state categorically that we are not party to the said event and have absolutely no information of its origin. We urge the general public to disregard attempts at linking our movement to this highly suspicious event.