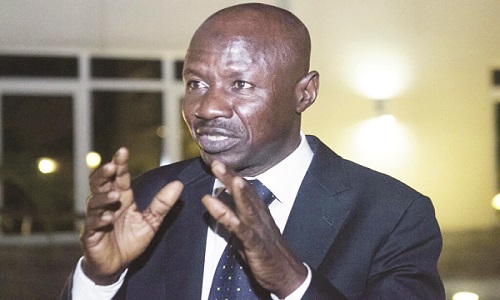 The Chairman of the Economic and Financial Crimes Commission (EFCC), Ibrahim Magu, on Tuesday described corruption as a crime against humanity.

Mr. Magu made the remark during a courtesy visit to the National Union of Textile and Garment Workers of Nigeria Head office in Kaduna.

He said that before now there was no hope for Nigeria but that President Muhammadu Buhari had shown “demonstrable political” will to deal with corruption.

“Corruption affects everybody that is why everyone is a major stakeholder in the fight.

“That is why I have the passion, zeal and the courage to lead the fight against corruption,” Mr. Magu said.

He said Mr. Buhari and Vice-President Yemi Osinbajo had shown commitment in the fight against corruption and called on the union to support the campaign.

In his remark, Issa Aremu, the General Secretary of the union, said EFCC should be empowered to invite anyone living above their means to explain their source of wealth.

Mr. Aremu said if investigating agencies were not satisfied with explanations by suspects about their sources of wealth, such persons should be prosecuted.

“If found guilty the person should be made to forfeit entire proceeds from corruption,” Mr. Aremu said.

He suggested that a special account be designated as Infrastructure Development Fund from recoveries from corruption proceeds.

Mr. Aremu commended the Buhari administration for its campaign against corruption.

He said there was an urgent need for a national strategy against graft which was killing the culture of industry, enterprise, and productivity in Nigeria.

“We call on Buhari to revisit the 2014 National Conference Report and implement some measures that would deepen the government’s war against corruption. `Aremu said.