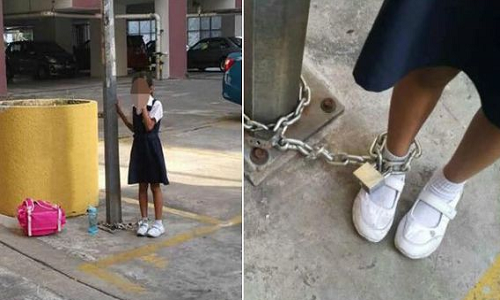 An unidentified “cruel” mum in Kuala Lumpur, Malaysia, has come under fire for chaining her young daughter to a street lamp post for truancy.

The 30-year-old mum said chaining her young daughter was punishment for failing to attend Mandarin classes at school in the Malaysian capital.

Photos of the tearful eight-year-old girl with a metal chain padlocked around her right ankle and also padlocked to the lamp post, has sparked outrage.

The young girl, who was in her school uniform with her school bag and a water bottle on the ground next to the huge metal lamp post, was left at the spot in front of their house on Wednesday afternoon by her angry mum for over an hour before her cries attracted the attention of horrified onlookers at the nearby car

The onlookers tried to free her but the thick chain, which had been secured with two padlocks by the girl’s mum, proved difficult to break, forcing good Samaritans to call in the police.

The police, who arrived around ten minutes later, tracked down the unemployed mum and took her in for questioning.

She, however, was later released by the police while no formal charges were brought against her for what many have described as a cruel punishment against the poor child.