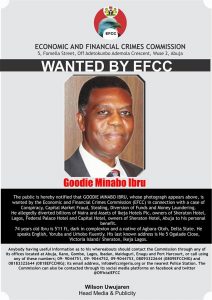 Businessman Goodie Ibru has been declared wanted by the Economic and Financial Crimes Commission, EFCC.

This was made known in a statement issued on Wednesday, October 12, by the agency’s spokesman, Wilson Uwujaren. It states Ibru is wanted in connection with alleged money laundering, conspiracy, theft, capital market fraud and diversion of billions of naira and assets of Ikeja Hotels to his personal use.

“The public is hereby notified that Goodie Minabo Ibru, whose photograph appears above, is wanted by the Economic and Financial Crimes Commission (EFCC) in connection with a case of conspiracy, capital market fraud, stealing, diversion of funds and money laundering.

“The 74-year-old Ibru is 5’11 ft, dark in complexion and a native of Agbara-Otoh, Delta state. He speaks English, Yoruba and Urhobo fluently. His last known address is No 5 Ogalade close, Victoria Island/Sheraton, Ikeja Lagos.

“Anybody having useful information as to his whereabouts should contact the commission through any of its offices located in Abuja, Kano, Gombe, Lagos, Ibadan, Maiduguri, Enugu and Port Harcourt.”