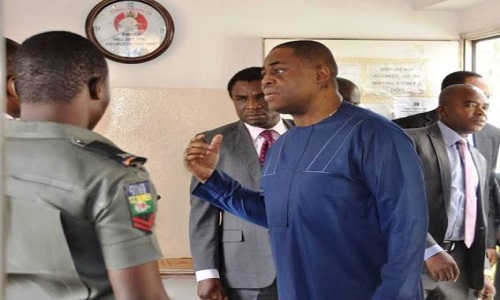 The ex-Minister of Aviation, Mr. Femi Fani-Kayode has had fresh money laundering charges filed against him at the Federal High Court in Abuja by the Economic and Financial Crimes Commission.

Fani-Kayode who was the Director of Media and Publicity in the campaign organisation of ex-President Goodluck Jonathan, is already standing trial before the Federal High Court in Lagos.

He is facing 17 counts of money laundering before the Lagos Division of the court, along with a former Finance Minister, Nenadi Usman; Danjuma Yusuf and a firm, Joint Trust Dimension Nig. Ltd.

They were charged with unlawful retention, unlawful use and unlawful payment of money to the tune of N4.9bn.

But in the fresh charges numbered, FHC/ABJ/CR/140/2016, Fani-Kayode is the sole defendant.

The EFCC in the fresh case filed five counts in which it accused the defendant of diverting N26m allegedly received from the Office of the National Security Adviser while Sambo Dsuki was in office.

The EFCC also accused him of handling the said N26m without going through financial institution as required under the Money Laundering Act.

The case was mentioned before Justice John Tsoho of the Federal High Court in Abuja on Friday.

The prosecution was absent at the proceedings.

Although Fani-Kayode was absent, he was represented by a team of lawyers led by Mr. Wale Balogun. Balogun wondered why the prosecution who filed the charges was not aware of the proceedings.

He complained that his client had yet to be served with the charges as required.

He sought an adjournment and the judge adjourned till November 10 for arraignment.

The judge also ordered that hearing notice be served on the EFCC.