Home Entertainment Everything You Need to Know About Ice Prince’s ‘Jos To The World’...
Facebook
Twitter
WhatsApp 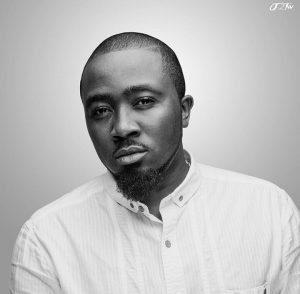 Ice Prince is gearing up to release his fourth studio album, ‘Jos To The World’. The album, which is probably the most highly anticipated release before the year runs out, will serve as the follow-up to his 2015’s ‘Trash Can’ EP.

‘Jos To The World’ is set to drop today, October 28. Before then, take a look below to find out everything we know about Ice Prince’s new album.

His first album under his new label, Super Cool Cat 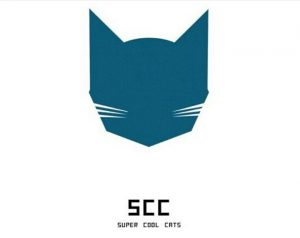 Ice Prince has released his previous albums on Chocolate City, and his new project will definitely arrive via his Super Cool Cat imprint instead. Let’s see if that changes anything.

The Cover art is so cool 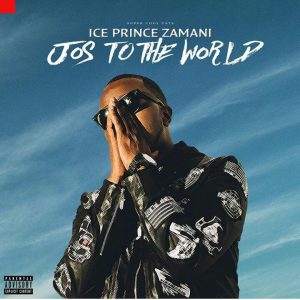 Ice Prince posted the full tracklist on his instagram page recently. The image showed that the album will feature 19 songs, with lots of collaborations. 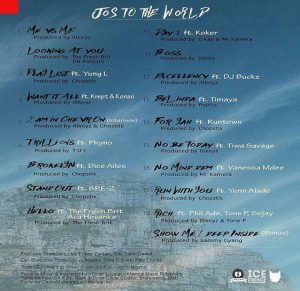 ‘Jos To The World’ could become the album with the highest number of Collaborators EVER.

The names that are included on Ice Prince’s ‘Jos To The World’ sound like an all-star lineup. Yemi Alade, Tiwa Savage, Timaya, Vanessa Mdee, Runtown, Phyno are just a few of the heavyweights on the track. 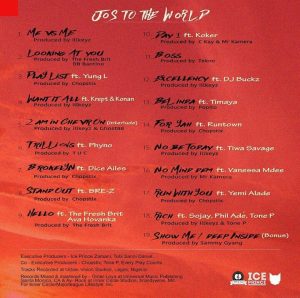 Rave of the moment, Tekno produced track 11, ‘Boss’, on the album. 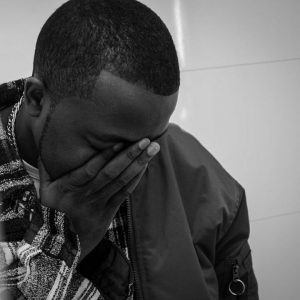 Ice Prince has been busy promoting ‘Jos To The World’ on social media – using #J2dw as a common hashtag throughout his promotions.

Album of the Year Doesn’t Cut It

While some rappers may be contented with album of the year accolades, Ice Prince is reaching further than that.