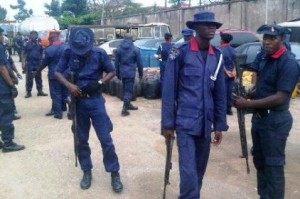 The Nigeria Security and Civil Defence Corps (NSCDC) in Niger State revealed on Saturday to newsmen that it arrested a suspected fake army general in Minna on Monday.

Commandant of NSCDC in the Niger State, Commander Philip Ayuba, who made the disclosure said,

“The suspected fake army General you are seeing specialises in defrauding unemployed applicants by promising them job in either the military or paramilitary outfits in the country’’.

Ayuba explained that the suspect was arrested by an undercover team of NSCDC in Minna metropolis after he had concluded plan to collect a balance of N450,000 bargained for a job in NSCDC.

The NSCDC Commander said the suspected accomplice of the suspect, Abubakar Ibrahim, was at large.

He said the suspect would be charged to court as soon as investigation was completed.