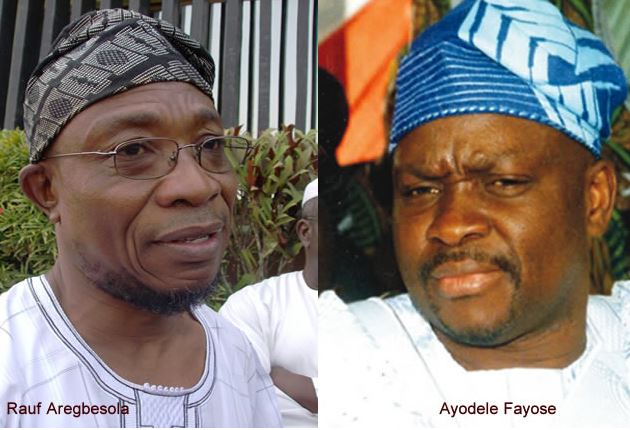 The Ekiti State Governor, Ayodele Fayose, and his from Osun State counterpart, Mr. Rauf Aregbesola have disagreed over the need to sell national assets to finance the 2016 budget.

While Aregbesola urged the Federal Government to sell ‘idle’ national assets and spare the functional ones, Fayose opposed the idea, arguing that selling them would amount to auctioning Nigeria.

The duo spoke in Ado Ekiti during an interactive forum which was part of the activities lined up to mark the 20th anniversary of the creation of Ekiti State.

They, however, canvassed regional integration and cooperation as well as the revival of agriculture as some of the steps to revive national economy.

Aregbesola, who delivered a lecture entitled, “The imperative of unity,” said the biting economic problem was such that in the whole of the South-West region, only Lagos State could stand on its own.

He said, “We should revive agriculture, especially food production. Agriculture gives us raw materials for industries and aids in no small measure in economic development. If we can improve on our productivity in food production through agriculture, we will eliminate hunger in our land.

“I want to urge Nigerians to end the ongoing vandalism of oil pipelines as the militants’ activities have been reducing the nation’s daily oil productivity level to between 700,000 and one million per barrel.

“The current vandalism of oil pipeline by the Niger Delta militants is robbing the nation of oil production of 700,000 to one million per barrel on a daily basis. This amounts to a huge loss of oil revenue to the country and has further led to the current recession in the country. An urgent concerted effort is therefore needed to stop the vandalism so that the country could get out of the recession.”

Aregbesola added, “It is high time the Yoruba nation and indeed the South-West united in terms of integrating our development strategies in education, commerce, economy, agriculture and tourism among others. There is no reason we should not unite for the best.

“The truth is that no Yoruba state, with the exception of Lagos State, can survive alone without collaborating with sister states. Therefore, we have to come together, pull together our abundant human and material resources.”

The governor described Ekiti people as men of integrity and courage and urged them to continue to support their governor for the development of the country.

“I congratulate all Ekiti people on the 20th anniversary of the creation of your state, my state, our state. You fought the Ekiti Parapo War which is an indication of unity of purpose. There is strength in unity.”

But Fayose, in his remarks, said selling the national assets was like selling Nigeria at a give-away price.

“Selling our national assets simply amounts to auctioning Nigeria. If we sell the assets because the country is in recession, what would be left of Nigeria?

“What would we call our own? Selling of assets is like moving the country backward. If we sell the assets to finance this year’s budget what would we sell next year? The Federal Government should look beyond its party and assemble economists and financial experts that would assist the President in his drive to bring the nation out of the present economic quagmire.”

Urging the Federal Government to uphold the principles of justice and equity, which he said were germane to building democracy, the governor said, “Justice is very important and without it, democracy is already endangered. If people are now beginning to contest against the Independent National Electoral Commission and security agencies for manipulation of elections, then democracy is endangered. It is political parties that are supposed to contest elections and not people contesting against inadequacies of the electoral umpire.”