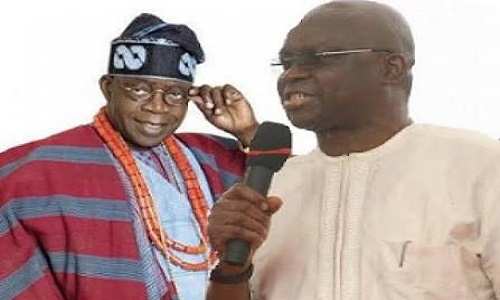 Governor Ayo Fayose has risen to the stout defence of former Lagos State Governor and chieftain of the All Progressives Congress (APC), Asiwaju Bola Tinubu, following alleged plans to cut him (Tinubu) to size by some political hawks.

Tinubu has recently come under fire from some groups and politicians over his calls for the national chairman of the APC, Chief John Odigie-Oyegun to resign.

A group known as the APC Youth Democratic Frontiers had on Tuesday staged a protest at the national secretariat of the party, saying it would no longer tolerate the “over bearing tendency” of the former Lagos governor.

Following the purported plans to demystify him over his perceived growing influence beyond the South-West, where he wields unrivaled political influence, some Nigerians, prominent among them retired army general Iliyasu Ibrahim, ex-Aviation Minister Femi Fani-Kayode and columnist Femi Aribisala, have rallied support for Tinubu, whose immense contributions to the success of APC in the last general elections, are indisputable.

Joining the growing list of those in support of the APC chieftain is Fayose, who warned those hoping to reap political capital from the conspiracy against Tinubu, to have a rethink.

The governor, in a statement issued by his spokesman, Lere Olayinka, in Ado Ekiti, the state capital yesterday, warned that “humiliation of Tinubu is as good as humiliation of the Yoruba race”.

He said he would not keep silent in the face of attack on a revered Yoruba leader like Tinubu and declared: “Yoruba leaders must be protected”.

Recalling similar attacks in the past on Yoruba leaders like Chief Obafemi Awolowo, Chief Adekunle Ajasin, Chief Bola Ige, Chief Bisi Onabanjo (all late) and Alhaji Lateef Jakande, among others, Fayose said: “Even though I am not a member of the APC and will never be, I have elected to stand in defence of the Yoruba nation once again by saying no to the continuous dishonourable treatment being meted to Asiwaju Bola Tinubu, having paid his dues.

“If Tinubu is allowed to be embarrassed and disgraced just the way our past leaders were humiliated by these same elements, the Yoruba nation would have been made to suffer for uprightness”.

The Ekiti governor made specific reference to what he called a ‘sponsored’ protest against the APC leader at the party’s national secretariat earlier in the week, saying: “It is unfortunate that Tinubu is now being vilified in a party he invested heavily in and his fellow kinsmen that he brought up politically are part of this conspiracy.

“In their desperation, they have even tried to set him against the Vice President, Prof Yemi Osinbajo, by insinuating that he tried to prevent his (Osinbajo) emergence as President Muhammadu Buhari’s running mate. This is sad!”

He lamented that “when other tribes protect their own, it is becoming historically common among the Yoruba to allow themselves to be used against their leaders just for momentary political gains at the expense of the collective interests of the Yoruba nation.

“It should be noted that the late Chief Obafemi Awolowo was sent to jail by the conspiracy and collaboration of some Yoruba with external aggressors”.

Continuing, Fayose said: “Tinubu is a prominent stakeholder. We should not sit back and watch while those he used his own sweat to make conspire with others to humiliate him.

“Most importantly, it is my position that irrespective of political affiliation, no leader of the Yoruba nation must be vilified unduly, especially by the same people who humiliated our past leaders like Obafemi Awolowo, Adekunle Ajasin, Bola Ige, Bisi Onabanjo, Lateef Jakande and others.

“To me, Asiwaju Bola Tinubu should not be seen just as an APC leader but acknowledged as a major stakeholder in the Yoruba nation that we must all protect beyond politics.

“It should be recalled that these were among the issues that I raised when I visited Governor Rauf Aregbesola of Osun State a few months ago on the need to work together beyond party affiliations.

“Here in Yorubaland, it is said that if a household is at peace, it is because the bastard in the family is yet to attain the age of maturity, and those people that Asiwaju Tinubu made but are now being used against him should watch it.

“I therefore condemn this conspiracy against Asiwaju Tinubu and I admonish those that are hoping to make political benefits from it to have a rethink”.