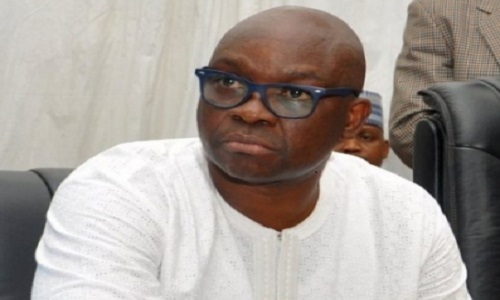 About one week after the Edo governorship election, Governor Ayodele Fayose of Ekiti State has given a damning verdict of the exercise, saying the Peoples Democratic Party, PDP, and its candidate, Osagie Ize-Iyamu, contested and lost to the Independent National Electoral Commission (INEC), not the ruling party’s candidate.

The All Progressives Congress, APC’s candidate, Godwin Obaseki, was declared winner of the election on Thursday by INEC with 319,483 votes to Ize-Iyamu’s 253,173 votes.

The PDP, its candidate and some other opposition parties, have since rejected the result of the elections announced by INEC, calling for a cancellation of the entire exercise.

Speaking for the first time since the announcement of a winner of the Edo governorship poll, Gov. Fayose said the APC victory was only made possible by, in his words, “the use of federal government agencies to subvert the will of the people”.

In a statement issued Monday by his Special Assistant on Public Communication and New Media, Lere Olayinka, in Ado-Ekiti, the governor decried the win at all cost attitude of the APC, saying it is inimical to the sustenance of democracy in the country.

According to him, rather than the people of Edo State electing their own governor, the APC conspired with INEC to foist its own governor on the people.

He lamented that it was unfortunate that those whose change was made possible because the then PDP-led federal government allowed the people the freedom to make a choice had now eroded the independence of INEC.

“The stage for the manipulation of the election was set by the use of security agencies to postpone the election, even when there was no single security threat and what was witnessed in Edo State last Wednesday was the execution of the rigging plans perfected after the postponement”, Mr. Fayose said.

He said it should be obvious to all lovers of democracy in Nigeria and the international community that the APC-led federal government would never allow free and fair election in the country, as the PDP and other opposition parties would henceforth be contesting against INEC.

“The power of the people to choose their governor was completely robbed at gunpoint in Edo State,” he said.

“Unfortunately too, these elements have even murdered the rights of Nigerians to protest against the subversion of their will and it is now obvious that only the insistence of Nigerians can save democracy in the country.

“Like I have said before, we are already seeing signs of what to come in 2019 and Nigerians should know by now that it will only take their insistence for their votes to count as long as these APC elements remain in power”, Fayose asserted.