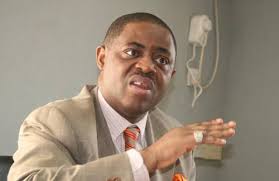 The Economic and Financial Crimes Commission has re-arrested a former Minister of Aviation, Femi Fani-Kayode.
Fani-Kayode was re-arrested by operatives of the anti-graft about 1.55pm outside the premises of a Federal High Court on Oyinkan Abayomi Drive, Ikoyi, Lagos.
Fani-Kayode, who was in court for his trial over an alleged fraud of ‎N4.9bn, was re-arrested shortly after he stepped out of the court premises.
Yesterday, the former minister stated that he knew that the anti-graft agency had plans to re-arrest and detain him for what might be a long time.
He said, “I have been reliably informed by my sources within the EFCC that they are planning to re-arrest and detain me for as long as possible once again even though I have been granted bail by the Federal High Court in Lagos. Fresh charges were filed against me by the EFCC at the Federal High Court in Abuja on July 7. The allegations border on a baseless allegation and false claim that I received N26million naira from the NSA’s office in 2014.”“These are politically-motivated charges and there is no truth in or substance to them whatsoever.”

His foreboding was confirmed.