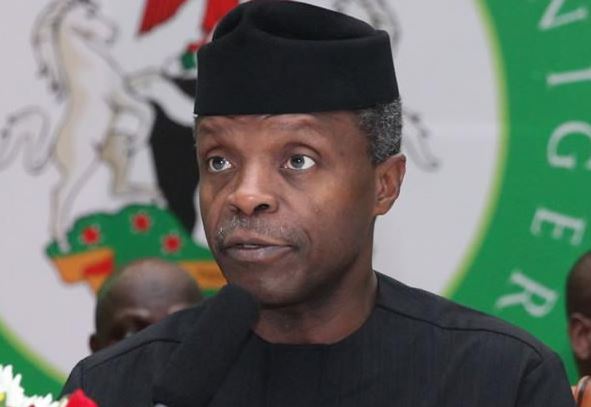 Vice-President Yemi Osinbajo on Tuesday said the government’s free National Home Grown School Feeding programme would start in some states of the federation this month.

According to a statement by his Senior Special Assistant on Media and Publicity, Mr. Laolu Akande, the Vice-President said this in an interview with some journalists.

The Federal Government had failed to commence the programme at the beginning of the current academic session in September as promised.

The programme, which was formally inaugurated on June 9, 2016 by Osinbajo, is part of the Social Investment Plans of the present administration for which N500bn has been budgeted for in the 2016 Appropriation Act.

The Federal Government, through the national manager of the programme, Mrs. Abimbola Adesanmi, had in July said it would commence the scheme in September when schools resumed, with 5.5 million pupils across the country.

But Osinbajo reportedly told the journalists that it was the expectation of government that the programme would kick off in several states before the end of the month.

He said while the Federal Government would fund the scheme for pupils in Primary One to Primary Three, it was expected that state governments would be responsible for pupils in primary four and above.

Osinbajo said, “Definitely before the end of this month, we expect that several states would have come on stream with their Home Grown School Feeding Programme.

“The programme will energise agriculture in the different states because it is what you plant that you feed the children with.

“We will be hiring caterers and cooks in each state because it will be Federal Government-funded from primaries 1 to 3 and the state governments hopefully would be able to cater for the other classes.”

The Vice-President said the programme was a section of the Social Investment programmes that would impact directly on the lives of Nigerian children and families.

He also disclosed that before the end of the month, government would also engage 200,000 out of the 500,000 graduates it promised to employ.

“We expect that before the end of the month, we will engage 200,000 out of the 500,000 unemployed graduates the Buhari administration plans to hire in the N-Power jobs programme.

“The direct government job is meant to keep these young people occupied, pay them some amount of money and also give them a device, which will also help them to learn several skills that they can develop as time goes on.

Osinbajo also said the micro-credit scheme for which the present administration would give loans to more than one million Nigerian artisans, traders, market women and others ranging from N60,000 to N100,000 would also start this month.

“For women across the country, we are giving loans, micro-credit loans to about 1.5 million women. We are focusing on market women and artisans.”

“We are working through the Bank of Industry. They are going to be giving out these loans and we have already identified the banks and everybody who is involved in this.

“We should be flagging-off hopefully before the end of this month,” he said