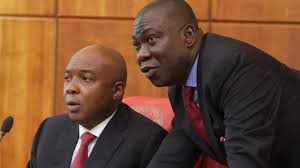 The Federal Government, on Friday, gave reasons why it decided to drop the two-count forgery charge it initiated against the Senate President, Dr. Bukola Saraki and his Deputy, Ike Ekweremadu, before an Abuja High Court at Jabi.

FG said it took the decision considering that the subject matter is already pending before Justice Gabriel Kolawole of the Abuja Division of the Federal High Court. Aside Saraki and Ekweremadu, government prosecutor, Mr. Aliyu Umar, SAN, also applied to terminate further proceeding on the charge against former Clerk of the National Assembly, Alhaji Salisu Abubakar Maikasuwa and his deputy, Mr. Benedict Efeturi.

Umar told the court that though his witnesses, including the Investigative Police Officer in charge of the case, were prepared and ready to testify, he said FG took the action as a mark of its respect for the rule of law. He said: “My lord, having been well guided at the last proceeding and because of certain applications I am about to make, I did not ask my witnesses to come, though the IPO is here. “On October 5, I filed response to motions of 1st and 2nd defendants. I was also served a counter-affidavit dated October 8.

“My lord I have also been served with the 3rd defendant’s notice dated September 30 and that of the 4th defendant dated October 4, “However, in view of the fact that this government respects the rule of law and hierarchy of the judiciary, it is obvious that these applications cannot go on. “Your learned brother in the Federal High Court is dealing with issues that are supposed to be dealt with by your lordship. “It is trite law that two courts of the same coordinate jurisdiction cannot be seized of the same matter at the same time. “Before this court, we have an amended charge dated October 5 and the original charge dated June 10 which the defendants pleaded to on June 27.

I apply to withdraw both the initial and amended charge. “I ask my lord to strike them out and discharge all the defendants”, Umar submitted. None of the defendants opposed the application, though their lawyers took turns to commend FG for withdrawing the charge. According to Saraki’s lawyer, Mr. J.B. Daudu, SAN, “going by facts and circumstances of the matter, it took the government a lot of courage to take this bold step”.

After listening to all the parties, Justice Yusuf Halilu struck out the two charges. “I have had the privilege of having the leadership of the National Assembly before me. For whatever reason, the prosecution has a duty to do its work and it has decided to withdraw the charge. “On the other hand, my duty is to strike the two charges out, accordingly the charges, having been withdrawn, is hereby struck out.

“The 1st, 2nd, 3rd and 4th defendants are accordingly discharged”, the Judge held. The defendants were hitherto on trial over allegation that they masterminded the usage of a bogus Senate Standing Rules for the July 9, 2015, election, through which both Saraki and Ekweremadu took over the leadership of the Senate. The court had on June 27, granted the defendants bail after they pleaded not guilty to the forgery charge against them. Whereas the court gave Saraki bail on self-recognition, it ordered the other defendants to produce two reasonable sureties each. The court stressed that the sureties must be owners of landed properties in the highbrow areas of Asokoro, Maitama, Wuse II or Garki in Abuja.

Meanwhile, the civil suit at the Federal High Court which was filed by Senator Bath Nnaji from Enugu State, is challenging the powers of the FG to meddle in an internal affair of the Senate.