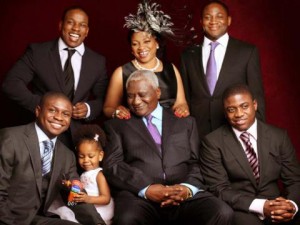 Another high society wedding is set to rock Lagos this November as Folorusho Alakija’s son, Folarin will be saying ‘I do’ for the second time.

Folarin, who was once married to a white lady, will be remarrying on Saturday, November 19, 2016 at the grand ballroom of Oriental Hotel in Lagos.

We gathered that the new bride-to-be, Naganin, is the daughter of Mr. Khosro and Mrs Nooshin Ghaissarifar, who are from Iran.

As you read, customized invitation cards have been sent to close family members, friends and associates to keep the date free in their diaries. Also, the colour code which is Tiffany and Purple has been in high demand by many high society women.

Folarin, who studied Geography at the Imperial College, London, U.K, had previously gotten married to a white lady called Chena. Infact, he was the first of the 4 Alakija boys to get married. Unfortunately, the wife died of cancer a few years after giving birth⁠⁠⁠⁠, leaving behind their little daughter.