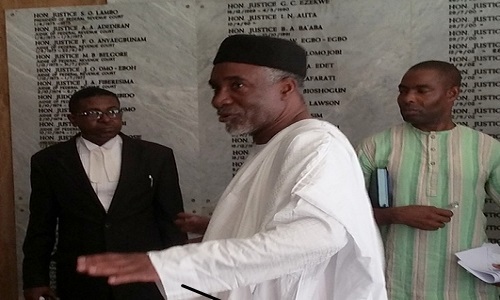 The group described the threat by Gov. Jibrilla as an empty charade.

A statement issued in Abuja and signed by the President of the Group, Mr. Timothy Ayuba, said it was common knowledge that the Appeal Court quashed all allegations of financial impropriety leveled against Nyako by the former Speaker of the House of Assembly and former acting Governor, Ahmadu Umaru Fintiri, who is currently facing charges of corruption at the Federal High Court, Yola.

“The issue of the white paper had been challenged in court and a judgment has already been delivered by the Appeal Court on the premise that ex- governor Nyako did not appear before the judicial panel headed by Justice Bobbo Umar that was set up by Fintiri. The court said that Nyako was not given fair hearing in this regard which amounted to a breach of his fundamental human rights”, the statement said.

It further said nemesis would soon catch up with Jibrilla for betraying Nyako, wondering why the governor would forget soon the role the former governor played in him (Jibrilla) becoming a senator and later governor of the state.