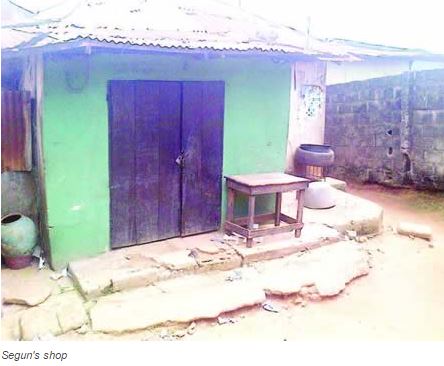 Some gunmen, who disguised as customers, have shot dead a fashion designer, Segun Sowemimo, in the Itu-Nla, Ikorodu area of Lagos State.

PUNCH Metro learnt that the four attackers, who went to Segun’s shop in Lemo compound on Saturday around 12pm, also brought a big stone in a polythene bag.

It was gathered that after killing Segun, the gunmen went to Allison Street and murdered a mechanic, whose name had yet to be ascertained.

They were said to have asked the mechanic to fix their faulty motorcycle when they shot him dead.

Our correspondent gathered that there was confusion in Itu-Nla area, as the assailants shot sporadically after leaving Segun’s shop, forcing residents to scamper to safety.

It was learnt that the incident was reported at the Igbogbo Police Division.

When PUNCH Metro got to the area on Monday, Segun’s younger brother, Abiodun, said the gunmen warned his brother’s apprentice in the shop to cooperate, or else they would also kill her.

Abiodun added that the police had yet to arrest any suspect.

He said, “It was exactly at 20 minutes to 12pm that we heard the gunshots. My brother was in his shop. He was working when the four men walked in like customers, and pointed guns at him.

“There was a woman and a little girl in the shop with him. The gunmen warned the woman that if she made any noise, they would kill her and the girl. After killing my brother, they started shooting into the air.

“Segun was married with two children. His wife and children have been taken to a safe place. He grew up in this compound and had been working here for as long as I can remember. The assailants walked in like customers.”

The woman, who was in the shop, said, “The four men had guns. One of them also carried a big stone in a polythene bag. As they shot Segun, they hit his head with the stone.”

Our correspondent learnt that last week, there were cult clashes and killings in Itu Nla, Anibaba, Allison and Oba Ale areas of Ikorodu.

She said, “There was a cult clash in the area, which led to the death of one. The police are on the trail of the culprits.”